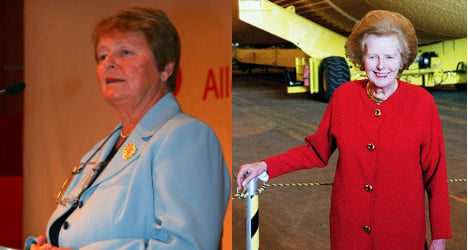 "Did I learn anything from her? No." Although she paid a customary tribute after Thatcher's passing, ex prime minister Gro Harlem Brundtland, who took office in 1981 — said her British counterpart was no role model.

"I had certainly developed my own style before she became prime minister," the Labour leader said in a statement emailed to AFP by a spokesman.

Although both women broke the ceiling of male domination in politics, the two had little else in common.

One was a leftist deeply committed to the welfare state, the other was a conservative who championed individualism. Where the former sought consensus, the latter wasn't afraid to clash with her opponents.

Brundtland was a strong advocate of the feminist cause and in 1986 formed a groundbreaking government where almost half the ministers were women, while on the other side of the North Sea, Thatcher described feminism as "poison".

"When I asked her how she planned to increase women's participation in her government, she clearly showed little interest in the issue and merely pointed out that there were few qualified women in the British parliament to choose from," Brundtland said.

"The fact that she was also leader of the conservatives and that she could take the initiative for increased equality on many levels obviously hadn't hit her," she added.

During her 11-year reign, Baroness Thatcher surrounded herself with men, with the exception of Janet Young, the first ever female leader of the House of Lords.

However, other leaders of the time, even those of another political stripe, credited her with clearing the path for other women.

Edith Cresson, French prime minister between 1991 and 1992 and a socialist, said Thatcher was an inspiration, describing her as a principled leader "who knew what she wanted."

Although she was several times "rightly blamed" for crossing the line — like when she did little to stop the deaths of IRA hunger strikers — Cresson noted that in politics "you should know if you just want to talk or if you want to have results."

The first woman to head a North American government, Conservative Kim Campbell who briefly led Canada in 1993, painted an even more flattering picture of the late British premier.

"She really just I think opened up a space for women in other countries to be credible as leaders," she told US public broadcaster PBS. Thatcher also shattered the "notion that you could not be tough and still be feminine, that there would be somehow some way that you weren't really a woman if you wanted to lead a country or if you were prepared to send people into battle," Campbell said.

"I think we all owe her a debt, whether we would have done as she did or not. And, you know, she had no role models," she added.

Two decades after Thatcher stepped down, it's a sentiment echoed by other woman world leaders.

"At a time when it was not normal for a woman to reach the highest democratic functions, she set an example for many of those who followed," said Germany's conservative Chancellor Angela Merkel.