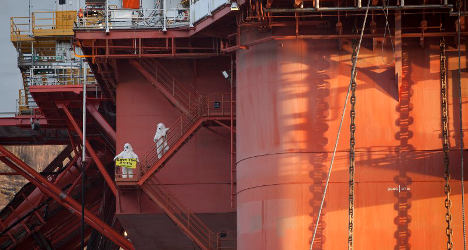 "No oil company in the world is prepared for Arctic conditions," said the head of Greenpeace Norway, Truls Gulowsen, one of the two activists who boarded the West Hercules platform currently stationed in Oelen in southwestern Norway.

"It is unacceptable that Statoil wants to gamble with safety and the environment in the vulnerable Arctic regions," he added in a statement.

Greenpeace sent two "polar bears" to "inspect" the platform and to raise public awareness about the dangers of oil activities in the Arctic, a region with extreme climate conditions and located far from mainland infrastructures.

The West Hercules is scheduled to be sent this month to the Norwegian waters of the Barents Sea, which is normally ice free, to conduct a prospecting campaign that is expected to last into 2014.

The campaign, which calls for up to nine drilling operations including some in zones very far north, is already several months behind schedule.

After changes to the West Hercules' route, operations in the northernmost zones have been postponed but are still planned.

"We are always evaluating the pace of our drilling in light of our resources and our priorities and there is nothing dramatic" about the changes, Skauby said.

After Shell and Statoil both postponed their respective drilling campaigns in Alaska, Greenpeace said it believes the major oil companies are realizing how difficult it is to operate in the Arctic.

"The oil industry is beginning to understand that drilling in the Arctic is much more difficult than it had us believe," Gulowsen told AFP.

According to a 2008 study by the US Geological Survey, the Arctic could hold up to 22 percent of the world's undiscovered oil and gas reserves, resources which have become more accessible in recent years as the Arctic ice melts.

Norway's oil production has been in steady decline for more than a decade.

But the country recently raised its estimates for its oil and gas reserves, due to the Barents Sea reserves.