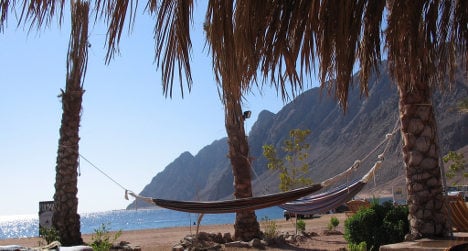 The southern resort of Dahab, Egypt, where the kidnapped tourists were reported to be going. Photo: jay8085

Six gunmen intercepted the tourists' car and forced them into their truck, the officials said. The pair had been travelling between the southern resort of Taba, on the border with Israel, and Dahab.

Norway's foreign ministry confirmed one of its citizens was abducted but gave no details, while an Egyptian police official said the woman was a 31-year-old Norwegian, after having earlier identified her as Belgian.

A spate of such hostage takings, which usually last for no longer than 48 hours, broke out in the restive Sinai after an uprising in early 2011 forced out president Hosni Mubarak and battered his security services.

The kidnappers are normally Bedouin who want to trade the hostages for jailed tribesmen.

In Israel, police spokeswoman Luba Samri told AFP: "We received unconfirmed information that a Norwegian tourist and an Arab-Israeli man resident of Eilat, originally from the Nazareth region, were kidnapped" in the Sinai.

Israel has repeatedly warned its tourists of threats of attacks in the Sinai, where Islamist militants have waged a low-level insurgency against the military and police as well as attacks on Israel.

But Friday's kidnapping did not appear politically motivated, with Bedouin sources in the area saying the kidnappers wanted to exchange the hostages for jailed relatives.

Bedouin kidnapped a British couple on March 7, only to release them within hours after talks with security officials. The Britons had been abducted from a bank in a town as they headed towards the Red Sea resort of Sharm el-Sheikh.