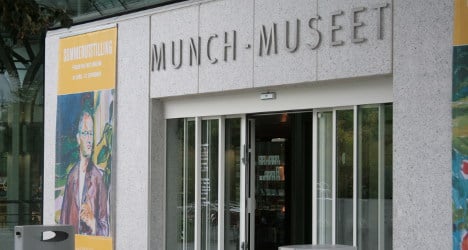 The current museum in Oslo is not seen as doing justice to the priceless trove. Photo: Jodyno

But she said Oslo's city council would have to make a formal request for the support. The city has been struggling for several years to reach agreement on a new museum to replace the current one.

Edvard Munch bequeathed a large part of his collection to the city on his death in 1944, including two versions of 'The Scream', perhaps the most famous expression of existential angst.

The current Munch Museum, constructed cheaply after World War II in a rather rundown Oslo neighbourhood, is not seen as doing justice to the priceless trove.

The city council agreed in 2008 to erect a new museum near the new, futuristic opera house on the shores of the Oslo fjord, but those plans were scrapped three years later over disputes about the cost, location and architecture.

The issue has been at a standstill ever since, and is considered an embarrassment in Norway as it celebrates the 150th anniversary of Munch's birth.

"It's a real shame that it has taken so many years," Tajik said, adding that the state funding should be seen as "a clear signal to help resolve the local discussions."

Tajik did not say how much money the state was ready to inject in the project, the cost of which is estimated at around 1.6 billion kroner (215 million euros, $278 million).

The main opponent of a new museum on the city council, Carl Ivar Hagen of a right wing populist party, said meanwhile he didn't expect the matter to be resolved anytime soon, stressing that the state funding would not resolve the thorny issue of where to place the new building.

The current museum is in dire financial straits due to the delays, low visitor numbers, and according to media reports, erratic management.

In February, management announced it was cutting 16 of 71 jobs, a decision the city council asked it to postpone pending further study of the situation.