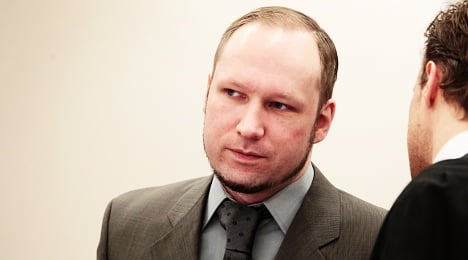 In his complaint to Justice Minister Grete Faremo and the governor of the Ila high security prison, Knut Bjarkeid, Breivik complained over being kept in isolation for too long.

For safety reasons, the 33-year-old has been kept away from other prisoners in a cell that has its own exercise yard, where he's entitled to spend one hour each day.

Breivik also lamented the lack of activities on offer, countless body searches and an "almost total" ban on expressing himself — all of which, according to his lawyer, violate Norway's law that prohibits acts of "aggravated torture."

"No matter what crime you have committed, you shouldn't be subjected to degrading treatment that there is no justification for," Breivik's lawyer Tord Jordet said.

"There are rules governing imprisonment and they should apply to all," he added.

In November, the killer sent a 27-page letter to prison authorities with a list of complaints ranging from everyday annoyances, like cold coffee and a lack of butter, to more serious issues, such as censorship of his correspondence, body searches and being kept in isolation.

But the letter only prompted some minor changes, his lawyer said.

The Norwegian justice ministry said "the right to file a complaint is part of the rule of law, which also applies to people held in prison", and that it would cooperate with the police. It declined to comment on the content of Breivik's complaint.

Prison governor Bjarkeid was on holiday and told AFP he needed more information about the complaint before being able to comment.

Accusing the Labour party of facilitating multiculturalism, Breivik opened fire on the summer camp of the party's youth wing on July 22nd 2011, killing 69 people, most of whom were teenagers.

His attack began in Oslo, where he set off a massive bomb outside the main government building, killing eight.

He was in August 2012 found sane and sentenced to Norway's maximum sentence of 21 years in prison, a sentence that can be extended indefinitely if he is deemed a continued threat to society.

Breivik believed the strict regime was a way for Norwegian justice ministry officials to exact revenge for the 2011 bombing that targeted a government building housing the ministry, according to his lawyer.

"The supposed motive (for this treatment) is vengeance and an attempt to drive him to suicide by making the conditions of his detention unlivable," Jordet said.