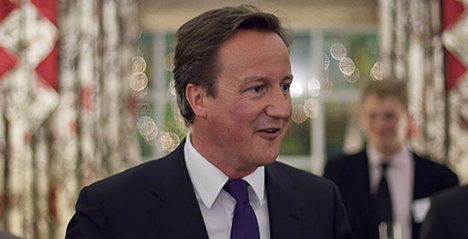 Around 20 EU leaders, including France's François Hollande and Germany's Angela Merkel, are due in Oslo on Monday for the formal event, but the high-profile names that have turned down the invite highlight the divisions plaguing the bloc.

British Prime Minister David Cameron's decision to decline the invitation, perhaps in a bid to pander to the eurosceptic wing of his Conservative Party, has been taken by some as further evidence that the 27 member states struggle to agree on even the most uncontroversial of issues.

Czech President Vaclav Klaus, a noted eurosceptic, has also said he will snub the ceremony.

Sweden's Fredrik Reinfeldt will be staying in Stockholm to take part in the awards ceremony for the five other Nobel prizes the same day, and according to Norwegian news agency NTB the leaders of Cyprus, Luxembourg and Slovenia will also not attend.

The Nobel Institute has said it never expected all government heads to make the trip. "We are very pleased that so many leaders are coming. We never expected everyone to be able to come," director Geir Lundestad told AFP.

With the number of member states swelling from the union's six founders in the 1950s to 28 when Croatia joins next year, the bloc has been credited with cementing peace between former foes and backing human rights and democracy as military regimes fell in the south and the Soviet bloc imploded in the east. But the award has been criticised not just in eurosceptic circles, especially since it comes at a time when the eurozone debt crisis strains the relationship between rich countries in the north and their southern neighbours who are beset by debt woes and painful austerity drives.

In a highly unusual move, several past Peace Prize laureates, including former archbishop Desmond Tutu, launched an attack on the committee's choice of winner this year.

They branded it "illegal" and claimed the EU was not the "champion of peace" that the Swedish philanthropist and creator of the prizes, Alfred Nobel, would have liked to see rewarded.

In any case, the October 12 announcement by the Nobel committee seems to have done little to help the bloc overcome its differences.

Rather, further cracks have appeared, denting the union's image: no deal was reached on a long-term budget, and European countries failed to speak with one voice on the Palestinian request to obtain "observer state" status at the UN.

At Monday's ceremony, the award will be collected by EU President Herman Van Rompuy together with European Commission President Jose Manuel Barroso and European Parliament President Martin Schulz, underscoring a leadership structure that is seen by some as too complex.

The Nobel committee's choice also caused a stir in Norway, a country that -– bolstered by its oil wealth – has rejected EU membership twice, and where three-quarters of the population is currently opposed to joining.

"An absurd prize," responded the powerful "Nej til EU" ("No to the EU") lobby. Together with dozens of other groups, it has announced a torchlight procession to mark its disapproval on the eve of the ceremony.

Moreover, several Norwegian ministers from the small, eurosceptic Centre Party will be absent on Monday, officially due to scheduling conflicts.

"There are always criticisms and questions over the Nobel Prize, and the EU has always been a political project around which we cannot build a complete agreement," the president of the Nobel committee, Thorbjörn Jagland, told NTB this week.

As when US President Barack Obama – another controversial laureate – won in 2009, Norway is pulling out the stops to boost security for the ceremony. Border controls have been reinstated and a no-fly zone will be established around Oslo.

The Nobel prize consists of a diploma, a gold medal and a cheque for eight million kronor (1.1 million euros, $1.4 million). The EU has pledged to donate the prize money to children affected by war and conflicts.