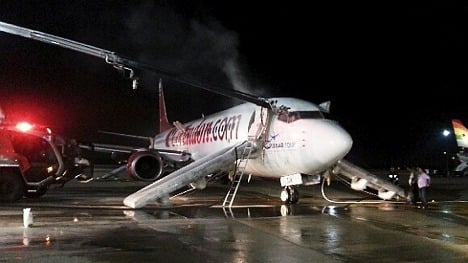 Passengers told Norwegian media that the pilots and crew fled the jet before the passengers could escape the smoke-filled cabin in a chaotic scramble for the exits.

The blaze broke out in the cockpit of a Boeing 737-800 of Turkey's Corendon Airlines shortly before it was due to take off early Sunday from the city of Antalya for Trondheim in Norway with 158 passengers aboard.

During the escape, two passengers each broke a leg, said television reports and the deputy director of the Oslo travel agency Detur, Fatih Fadir.

A third passenger suffered a shoulder injury and was also taken to hospital, while 25 were affected by smoke inhalation but later discharged, according to Turkish news agency Anatolia, quoting medical sources.

"The others were taken to hospital because they breathed in smoke, but it is nothing serious," Fadir said.

The other passengers were flown back to Norway later Sunday aboard another flight.

Speaking to the media on their arrival in Norway, some passengers accused the crew of fleeing the aircraft before they could.

"When we noticed the smoke, we all wanted to get out, but the crew asked us to stay seated," 30-year-old woman Tone Østensen was quoted as saying by the Verdens Gang daily.

"It was only when we actually saw flames that they realized it was serious, and so they left the plane all of a sudden, before the rest of us."

Another passenger, Marie Kveli Selvik, 18, was quoted as telling the newspaper: "I was sitting at the very front of the plane, and I saw that the door to the cockpit, which had been closed, was wide open.

"Suddenly the pilots ran out, while thick smoke escaped through the door. Then the crew also disappeared, they simply fled the plane."

Others described to the Norwegian media a chaotic evacuation, complicated by the smoke that filled the cabin, but which lasted only a few minutes.

Corendon, in a statement on the website Airporthaber, confirmed the fire and evacuation but did not mention casualties.

Norway's foreign ministry did refer to injuries, although it could not give a number, saying none of the affected passengers had contacted their embassy.

"We have reports about people hurt in this plane," a spokesman said. "Some were hospitalized in Turkey." 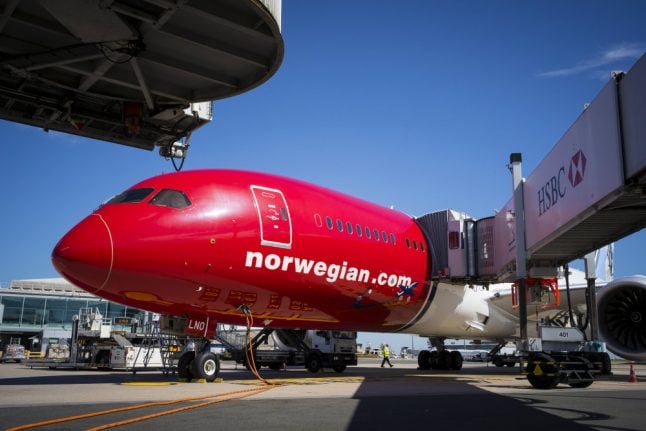