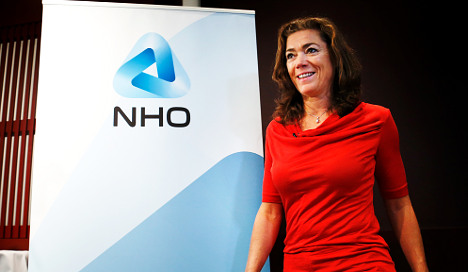 At the opposite end of the political spectrum, the conservative Progress Party welcomed Skogen Lund’s opening political salvos.

A day after her appointment as NHO chief, the former Telenor vice president immediately called for the abolition of wealth tax, while arguing that society benefits from having more wealthy people operating businesses and creating jobs.

“I don’t think we should be so afraid of letting people get rich,” she said in an interview with newspaper Aftenposten, arguing that creators of wealth also act as driving forces for the economy.

She further contended that business leaders are often unfairly targeted for their high wages.

“Being a leader can be quite thankless. It’s a difficult task and one has to do some unpopular things. What perhaps annoys me the most is that we’re not very good at getting behind the business sector,” said Skogen Lund.

In a comment that enraged Snorre Valen of the Socialist Left (SV), she also called for greater moderation on behalf of employees in collective wage agreements.

“I think we should be honest enough to say that we are not fully satisfied, especially with the settlements of the last couple of years. It has been very difficult to get approval and acceptance for moderation.”

According to Valen, her comments showed that the NHO wants managers to earn more and employees less.

“There needs to be some limit to the audacity. Right now workers are on strike against NHO Service because they’re being deprived of a decent pension. If Kristin Skogen Lund wants more moderation, she can start with her own people.

“As long as the pension of an NHO Service manager equates to an incredible 65 auxiliary nurse pensions, she can leave it to others to talk about moderation,” he told news agency NTB.

The SV parliamentarian also rejected Skogen Lund’s calls for the country’s wealth tax to be ditched, instead heralding the efforts of former Finance Minister Kristin Halvorsen, who stepped down as SV party leader earlier this year.

On the other end of the scale, Progress Party MP Mette Hanekam Haug appeared thrilled by the message being sent out by the new NHO leader.

“Will invite Kristin Lund to a public burning of the Law of Jante,” she wrote on Twitter, referring to a code defining entrenched anti-individualist social attitudes.