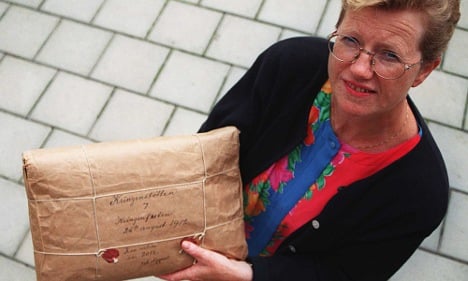 Photo: Magnus This file image from 1997 shows Sel development chief May-Britt Svastuen holding the mystery package (Photo: Magnus Smidesang Rønningen/NTB)
6.53pm: Good people: we’ve had thrills, we’ve had a bit of a spill, and now it’s Friday evening and we are out of here. We have much to consider. Very little of it has anything to do with the mystery package. Enjoy your weekend, wherever you are!
6.50pm: What we’ve witnessed tonight is something truly special in the workings of a democracy: municipal committee work.
6.48pm: Nobody actually said the words “mortifying disappointment”, but they have decided to leave the paper-filled package and switch to the rest of the evening’s entertainment. Which starts with another violin.
6.47pm: There’s a deathly hush in the crowd. Suggestions that some onlookers have fallen asleep are greatly exaggerated.
6.44pm: Some letters from the United States. Something about finances for a Kringen memorial. Some newspapers. Still no exotic animals or jack-in-the-box type surprises. They just said "Protocol 1909". It's thrill-a-minute stuff this.

6.41pm: It's not a mogwai or a troll. If you were expecting an anti-climax, you may well be on the mark. They just mentioned receipts, and documents, and a pennant that says "From the king". But don't give up hope, they haven't quite figured it all out yet.

6.40pm: There's a package inside the package!

6.36pm: The experts are getting their gloves on to open the package. Just in case.

6.35pm: The woman presenter, a kayaker whose name we didn’t quite catch, is making a show of letting everyone know she was related to everyone involved. Early claim for an inheritance?

6.34pm: We’re about to get a good look at Johan Nygaard’s package.

6.29pm: The expectation was that the brown parcel would be ripped open, gently, right about now. But, funk soul brothers and sisters, we are being made to wait as the rangy dancer completes her act.

6.28pm: In a flowing black dress, this woman is flitting about very nicely on the stage to a tasteful string accompaniment. They know how to put on a package-opening bash in Otta, and don’t let anyone tell you otherwise.

6.26pm: Just minutes away now as we’re treated to a spot of dancing to fill the gaping void in our souls that can only be filled by the removal of a century-old seal.

6.24pm: We’re still here, even if you’re not, but if you were we’d tell you that the musical interlude is over and we’re getting closer to the moment of truth. What. Is. In. The. Package?

6.22pm: And the fiddling continues.

6.15pm: A little bit of violin and guitar music here. Very soothing as we work to get the site back up and running.

6.14pm: Members of the Clan Sinclair are in the house to mark the “marvellous occasion”. The town of Otta and the Scots are good mates these days, putting aside their 400-year-old differences. Which is worth a round of applause. And that’s what it gets.

6.11pm: We've had a site crash as the tension weighs heavy on our servers.

6.07pm: We're getting all the background about the mercenary Scots and the Battle of Kringen now. Fairly confident we're going to get this in English too. The Swedes were the bad guys and the Scots signed up with them to battle the Danish-Norwegian forces. But against the odd, a local peasant militia sent the Scots packing. All this was in 1612, but that's how we remember it.

6.06pm: The TV cameras are there so turn off your telephones please.

6.03pm: Good, they're doing a lot of this in English now so we're not going to have to type quite so furiously. It's not going to be a little troll, surely?

6.01pm: A woman in traditional dress is belting out a tune. We didn't catch who she is but can tell you she's not giving anything away about the mystery parcel.

5.58pm: Princess Astrid of Norway has just entered the hall to see what all the fuss is about.

5.54pm: On Twitter, user Gepeddie suggests: #NorwegianPackage The original manuscript of "Take On Me" written by Edvard Grieg.

5.45pm: All quiet on the video front at the moment. People milling about, scratching their heads, some perhaps thinking of Gizmo, the cuddly mogwai in Gremlins, and how the whole thing turned ugly with bright light, some water, and a midnight snack. Let's hope it's not a mogwai.

5.40pm: Twenty minutes to show time, but the package won't actually be opened until 50 minutes from now. What's inside the blasted thing?

5.31pm: Bagpipers march through the streets of Otta to mark the 400th anniversary of the Battle of Klingen as the package is brought by foot to the town's fair grounds.