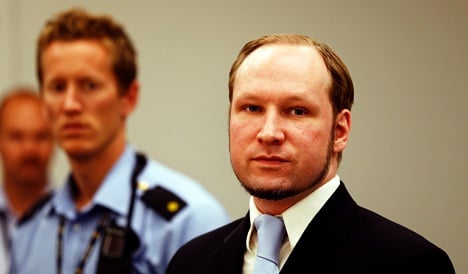 Breivik has admitted killing 77 people in the attacks that traumatized Norway and shocked the world, claiming eight victims in an Oslo blast and taking 69 more lives, mostly teenagers', in a shooting frenzy at an island summer camp.

The 33-year-old loner — who sees himself as a Nordic warrior against Europe's “Muslim invasion” and against all those who promote multiculturalism — is widely expected to be locked away for the rest of his life.

The main question is whether it will be in a jail cell or a mental ward.

Breivik, who laid out his hateful world view in a rambling 1,500-page online manifesto, was diagnosed with paranoid schizophrenia and declared criminally insane after his bloody rampage on July 22nd of last year.

However, a public outcry led to a second assessment, which found him legally sane — a view shared by most Norwegians in polls, and by Breivik himself who has said he would accept prison but appeal against closed psychiatric treatment.

The presiding judges will deliver the verdict and sentence on terrorism charges in a hearing from 0800 GMT, held in Oslo under tight security and to be attended by survivors, victims' relatives and media from around the world.

Early on Friday, hordes of journalists stood outside the Oslo courthouse in the rain, waiting to go through airport-like security checks.

A poll published in tabloid Verdens Gang on the day of the verdict showed that 72 percent of 1,107 Norwegians questioned think Breivik should be found sane.

And 54 percent said they consider his current detention conditions — he has three cells, with one for sleeping, one for physical exercise, and one workspace with an offline laptop — too “mild”.

Norway's penal code does not have the death penalty or life in prison, and the maximum prison term for Breivik's charges is 21 years. However, inmates who are considered a threat to society can be held indefinitely.

Breivik hopes to speak again on the final day of his trial, at which Norway has gone to great lengths to stress its free and fair judicial process.

In previous testimony during the 10-week trial that ran until June, Breivik laid out in chilling detail what motivated him to meticulously plan for years and then execute Norway's worst massacre since World War II.

Breivik has called himself a “foot soldier” for the 'Knights Templar', allegedly a clandestine ultra-right group named after an order of Christian Crusaders of the Middle Ages. Police doubt the group's existence.

He has also railed against “cultural Marxists” whose support for immigration he blames for the emergence of a “Eurabia”, the reason why he targeted the centre-left government and a summer youth camp run by the Labour Party.

The court heard how Breivik spent years planning the bloodbath, using a farm as cover for purchasing the chemical fertilizer he used for the almost one-tonne bomb he set off in a rented van outside Oslo's main government building.

In his years of seclusion, Breivik said he practised meditation, worked out and used steroids to steel his mind and body, while playing video shooting- and role-playing games for relaxation.

He joined a pistol club and obtained a hunting licence to get the 9mm Glock handgun and Ruger semi-automatic rifle which he used to mow down terrified youths, the youngest just 14, trapped on the tiny lake island of Utøya.

Dressed in a police uniform, he methodically shot dead 67 people, many at point blank range, and two more died as they fell to their death or drowned while trying to escape the more than hour-long shooting spree.

The bungled police response in low-crime Norway has been much criticized.

The only police helicopter was out of action because its crew were on holidays, and a SWAT team took more than an hour to finally make it to the island, forced to use a pleasure boat after their inflatable almost sank.

Norway's national police commissioner resigned last week after a scathing report on the response, and Prime Minister Jens Stoltenberg is due to appear before an extraordinary parliamentary session later this month.

During his trial Breivik showed little emotion and no remorse and once described his mass slaughter as “cruel but necessary” to protect Norway from multiculturalism. At one stage he told the court: “I would do it again.”