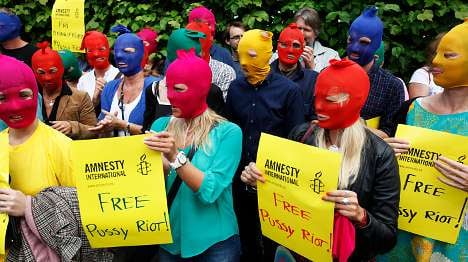 Some 50 to 60 demonstrators wearing brightly coloured improvised balaclavas gathered in front of the embassy at lunchtime, just before the verdict was announced.

Amnesty Norway’s secretary general, John Peder Egenæs, said he was not at all surprised by the guilty verdict.

“The script in this case has been written by the power brokers in the Kremlin. It was important for them to set an example,” he said.

"Unless we cast light on this, the Russian authorities will just keep locking people up in violation of freedom of expression. I'm afraid a lot more people will go to prison for this. Hopefully the attention will make a positive contribution."

The three band members Maria Alyokhina, Nadezhda Tolokonnikova and Yekaterina Samutsevich were sentenced on Friday afternoon to two years each in prison.

Backed by celebrities and human rights groups, activists across Europe demonstrated their support on Friday for the three women.

Rallies for Pussy Riot also took place in London, Kiev, Sofia, Barcelona, Brussels and Paris before the verdict was announced.

In London, around 50 people gathered at the Royal Court theatre.

The theatre staged a mini-play entitled "Pussy Riots, the final verdict", where actresses repeated the three women's arguments during the trial.

In Kiev, dressed only in shorts and boots, Inna Shevchenko, with "Free Riot" written above her bare breasts, used a chain saw to cut down a towering wooden cross erected in memory of the victims of Stalin's repression.

Her group Femen "expresses its support and solidarity with its Russian colleagues from the Pussy Riot band the day of the verdict" against them, the group known for topless protests said on its blog.

"Pussy Riot are an inspirational symbol of the fight for democracy in Russia," the activists behind the stunt said in a message emailed to AFP.

"The whole international community, including Bulgarian authorities support them against the attempts of the regime to shut their mouths," the protestors said.

But activists gathered later Friday outside the Russian embassy in Sofia to wait for the verdicts in the trial, wearing the same masks together with signs saying: "We all are Pussy Riot."

In Spain, about 50 young protesters, many of them punk music followers, rallied outside Barcelona's emblematic Sagrada Familia church to decry the detention and trial of the Russian group.

"Freedom for Pussy Riot," they chanted outside Antoni Gaudi's world-renowned masterpiece, an as-yet unfinished basilica that was consecrated by Pope Benedict XVI in 2010.

"This is very serious in the context not only of what is happening in Russia but also in Europe where liberalism is advancing to the detriment of democracy," said one protester, Anna Ruiz.

"I am not a fan or a follower of Pussy Riot but I am here because I am on holiday and to condemn repression, said an 18-year-old student from Saint Petersburg called Katia, carrying a banner with a photo of a Pussy Riot member.

In Brussels, 50 people summoned by the Belgian branch of the human rights group Amnesty International gathered near the Russian embassy.

The protesters shouted: "Set them free. We have come to defend freedom of expression." Others carried portraits of Putin, who appeared with heavy make-up and was renamed for the occasion as "Vladimir Pussy".

In Paris, a protest drew around 200 people, including some young women wearing the coloured balaclavas.

"We are all Pussy Riots," said one of the women, Flore Breto, as she stood near a protester brandishing a sign with the slogan "free the friends, jail Putin!"

Earlier this week, four masked activists staged a brief pro-band protest in Vienna's Russian Orthodox church while Canadian electro-punk performance artist Peaches posted a video on line in which she called for Putin to be lynched. 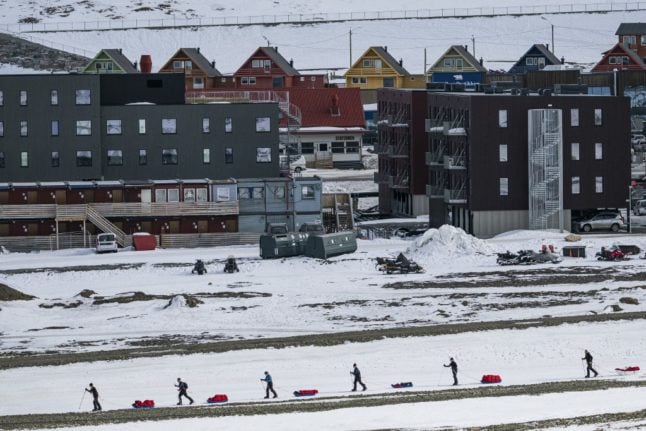