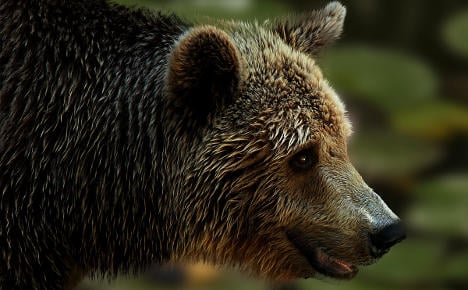 A file image of a brown bear (Photo: Darko Skender)

Hunters were deployed on Thursday morning to search for the animal, which disappeared into the woods after sustaining injuries in the crash.

Driver Lene Tørudstad said she, her husband and their two children were somewhat rattled immediately after their encounter with the elk. Then the bear appeared.

"Suddenly he was on the road. I braked as hard as I could but we hit the bear," she told broadcaster NRK.

"I'm still shaky. I slept barely two hours last night. It's one thing to crash into an elk or a cat, but a bear… that's not something I ever would have believed."

Police said it was rare for a driver to come face to face with a bear, even in Hedmark county where around 40 of Norway’s estimated 150 bears are thought to live.

The accident happened shortly after midnight on the stretch of national road 3 between Atna and Hanestad.

“The driver first came close to colliding with an elk, then along came a bear,” police investigator Egil Solberg told TV 2.

The car was damaged in the crash, while the bear took fright and ran away.

“The bear took a real hit. The front light on the car was smashed and there was quite a bit of damage to the body [of the vehicle],” police spokesman Trond Langeland Sulen told newspaper Østlendingen.

Municipal hunters headed out at 5am to search for the wounded animal. Egil Solberg fears the bear may be dangerous, but noted that there are not many people walking about in the area.

“It’s mostly traffic. Also, there’s a bear hunt underway in the area so there aren’t many people in the woods.”

Hunters said they found traces of the bear’s blood on Thursday morning but had not yet located the injured animal.