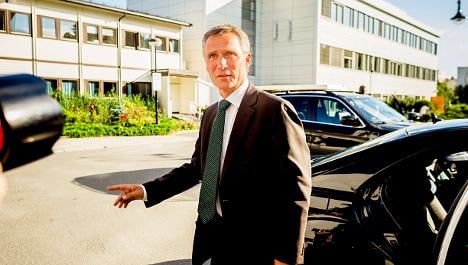 The Labour Party leader has come under fire this week after an independent commission presented a report outlining major deficiencies in the reaction of police and government agencies to the terrorist attacks that left 77 people dead last July.

Stoltenberg was personally criticized in the report for failing to implement a recommendation dating back to 2004 to ban all motor traffic on the street outside government buildings where Anders Behring Breivik set off a car bomb that killed eight people.

But while newspaper VG on Tuesday led calls for the Prime Minister to step down, four separate surveys have shown that a majority of Norwegians want Stoltenberg to keep his job.

In a poll carried out by InFact on behalf of VG, 52.1 percent of respondents said the Prime Minister should remain in his post; 32.7 percent said he should resign; while 17.2 percent said they didn’t know if he should stay or go.

In a Norstat poll for NRK, 72 percent of respondents said no when asked if Stoltenberg should step down in the face of the commission’s criticism.

In a simimar Norfakta survey, just 19 percent of respondents said Stoltenberg should resign.

An Ipsos MMI survey for newspaper Dagbladet produced similar results: 21 percent of respondents want Stoltenberg to step down, while 64 percent want him to stay on.

Speaking to NRK, Jens Stoltenberg said the poll results reflected support for the work his government needs to carry out to ensure the mistakes of last summer are not repeated.

Right-wing extremist Breivik on July 22nd 2011 set off a car bomb outside the government offices in Oslo, killing eight people, before going to the island of Utøya, north-west of the capital, where he spent more than an hour gunning down another 69 people, mostly teenagers, and wounding dozens of others.

An independent commission appointed by Stoltenberg to see what lessons could be learned from the authorities' response submitted its report on Monday, primarily criticizing the police's slow and disorganized handling.

But it was also highly critical of the government.

Stoltenberg, who enjoyed soaring popularity in the wake of the attacks with his calls for more openness and democracy, was personally singled out for having failed to address the safety of his government offices at the highest levels when it was brought to his attention as early as 2007.

"Our authorities have simply not been able to protect us because of incompetence, failure to follow up on adopted measures and a lack of respect for emergency crisis plans," an editorial read.

"It would be intolerable if there were no direct consequences on the people in charge," it added.

Stoltenberg, whose centre-left coalition holds a majority in parliament, has rejected the idea of a resignation.

"The best way for me to take responsibility is to ensure that the necessary measures to improve security are carried out," Stoltenberg said on Monday after the report was published.

With one year to go before the next legislative elections, the opposition has said it does not plan to gain politically from the matter. But parliament is to hold an extraordinary session at an as-yet-undetermined date to discuss the report's conclusions.