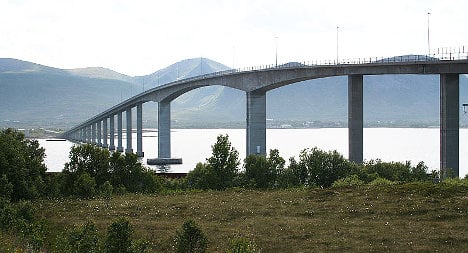 “He has emerged without any lasting injuries,” said the mayor of Lenvik, Geir-Inge Sivertsen, who is also a friend of the family.

“Neither you nor I would have survived it. So the fact that it’s going so well is absolutely fantastic,” he told newspaper Nordlys.

The accident happened on July 20th as the boy and his father stopped to look out at the sea from the Andøy Bridge. But the tender moment gave way to horror as the boy slipped out of his father’s grasp, stepped out onto the road and was hit by a car.

The force of the collision propelled the boy into the air, over the guard rail, and out into the fjord below.

Fortunately, the shocked dad had the presence of mind to notify the emergency services before making his way to his boat, which was docked nearby. He quickly made his way out to his son and pulled him out of the water.

The boy retained consciousness throughout and was back on dry land by the time the emergency services arrived.

The four-year-old was then taken by air ambulance to the university hospital in Tromsø to be treated for serious injuries.

If the situation looked bleak then, however, it has brightened considerably in the intervening time.

“The boy is on his feet again. He’s in daycare, and everything is fine with him,” said Sivertsen.

Witnesses told police they did not believe the car had been travelling too fast at the time of the accident.

Norway's iconic Hurtigruten passenger ships regularly pass under the Andøy Bridge, which is located in the picturesque Vesterålen archipelago in north-western Norway.