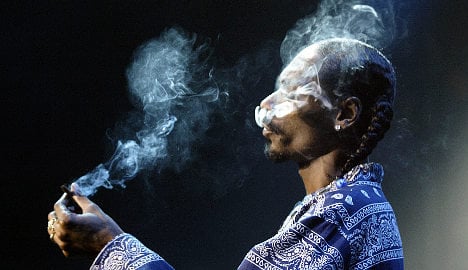 The 40-year-old musician, who has since changed his name to Snoop Lion after a baptism by a Rastafari priest on Jamaica, will now not be allowed into Norway until the summer of 2014.

The artist and his 20-person crew were stopped by customs officials at Kjevik Airport in Kristiansand ahead of a planned performance at the Hove Festival in late June.

He was found to have eight grammes of marijuana in his baggage and was arrested and taken to a city centre police station.

He admitted to the illegal importation and possession of the narcotics and was issued with a 12,000 kroner ($2,000) fine.

The controversial rapper was also fined a further 40,000 kroner after police found he was carrying 227,000 kroner in cash, 202,000 kroner above the legal limit.

Despite the impromptu intervention Snoop Dog fulfilled his commitment to perform at the Hove festival the following day.

The Norwegian authorities have however decided that further punishment was required and announced their decision this week to bar him from the country.

Snoop Lion's Norwegian lawyer Holger Hagesæther confirmed that the artist accepted the decision to ban him from Norway and did not plan to appeal.

"The artist and his team have decided that they can live with the decision. They respect the decision and will not appeal against it," Hagesæther said, according to a report in the Dagbladet daily.

Snoop Dogg previously sparked a storm of criticism in Norway when he appeared to smoke marijuana on stage at the Quart Festival in Kristiansand in 2005.

He has furthermore been banned by several other countries due to his criminal record.

In 2006 he became persona non grata in Britain after a brawl at Heathrow Airport, although successful appealed the decision. In 2007 Snoop was banned by Australia and he also spent time in Swedish custody following another drugs arrest in Stockholm.