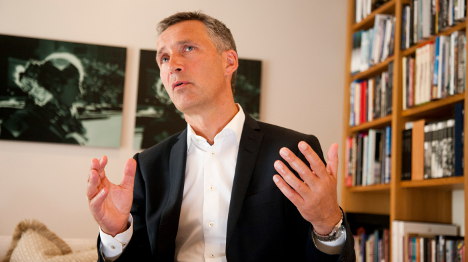 Photo: Tor Erik Schrøder/NTB Scanpix
Stoltenberg confirmed in an interview with the VG daily that he was unsure whether the euro will survive, but assured that he wasn't losing any sleep over it.
"I sleep well at night, because we have taken care of the opportunities we have had. We have demonstrated responsible use of money in good times and set aside money for hard times," he said.
"That is what is the problem for many countries in Europe now – they have spent too much money and they now have no money to put in when problems arise," he added.
He did not want to dwell on the negatives in the situation, but admitted that recent developments were of concern.
"I am concerned that the eurozone countries won't be successful. We will then run the risk that millions of people will lose their jobs and many people will be at risk of losing their savings. It will give us a difficult situation."
"That is why the eurozone countries are trying hard to ensure that the euro doesn't collapse. But we can't be sure of their success," he said.
Stoltenberg assured that the government is ready to take measures to avoid that Norway is affected.
"We can act quickly. We are prepared and ready. But we are not in a situation where I want to give notice of the measures now," he said.
At the same time Stoltenberg urged caution against the view that Norwegian oil is a guarantee against a crisis.
"In the 90s, Norway experienced a banking crisis, debt crisis and high unemployment. And we had oil revenues. It is naive to believe that oil revenues will always save us," he warned.