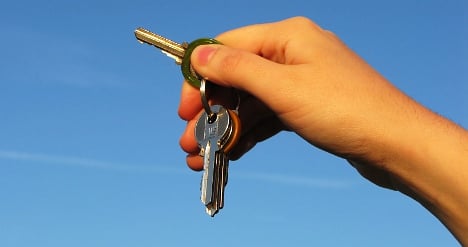 Hans Christian Skullestad had already slipped under the sheets on Saturday night when hunger struck and he got back up to chomp on a chicken drumstick.

Despite his fiancée’s protestations that he’d already had enough to drink, Skullestad was adamant that he needed a beer to wash down the late-night snack.

The stark-naked groom-to-be made a beeline for the garden shed, where the couple had stored a massive stockpile of drinks in preparation for their wedding next month. But to his enormous dismay, the door was locked.

Convinced his budding bride had hidden the key, Skullestad embarked on a good-natured chase that quickly took the pair outdoors and onto the streets of Rygge, south-eastern Norway.

“It started in a humorous fashion but ended up with the police putting me in handcuffs,” he told newspaper Moss Avis.

After leaping over the garden fence to track down the bearer of the keys, the thirsty pursuer was astonished to suddenly find himself in a scuffle with a taxi driver.

“She threw the keys into the taxi and I threw myself in after them. Suddenly the taxi driver found himself with a naked man on his lap, and he wasn’t to know if I was an attacker or a lunatic, so he tried to throw me out of the car.”

As Skullestad bit the driver's nose in a bid to escape his firm grip, the cabbie hit the emergency button in his car and within two minutes the police were on the scene.

After his release from a cell in Fredrikstad on Sunday, Skullestad said he wanted to go public with his story so people in the area wouldn’t think he was a wife-beater.

He also apologized in the local paper to the taxi driver, who had only pulled over because he thought he was witnessing an attempted assault.

“I can well understand that. I’m 1.90 metres tall and my girlfriend is from Vietnam and is considerably smaller. What’s more, I was naked.”

He later found out that his mischievous fiancée had in fact lobbed her car keys into the taxi cab – the keys to the shed had been hanging in their usual place in the hall all along.

Fortunately, however, Skullestad’s brush with the law hasn’t led either of them to consider parting company long before death does them in. The wedding is set to go ahead on August 10th.