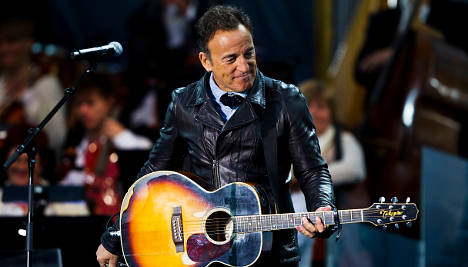 Prime Minister Jens Stoltenberg had earlier led tributes to the victims of the massacre during ceremonies at the two attack sites on the island of Utøya, and during a church service.

Standing in the rain, many of them carrying roses, tens of thousands of people gathered outside Oslo city hall for the tribute concert, which featured US rock star Bruce Springsteen.

Breivik's attack began in Oslo, where he set off a massive bomb outside the main government building, killing eight, before travelling to the island to carry out his shooting spree.

The tribute concert was attended by members of the royal family, including Prince Haakon and Princess Märtha Louise. Police put the turn-out at around 50,000.

Stoltenberg, welcoming the crowd, hailed the emergency services and all those who had worked to heal those affected by the killings.

"We could have retreated into our homes in fear. And barricaded ourselves behind a wall of mistrust.

"Instead we turned to each other and built bridges of trust…

"We made the right choice. There is no better protection against terrorism than openness, democracy and humanity."

The first to perform was Iranian-Swedish singer-songwriter Laleh, an embodiment of the multiculturalism so hated by Breivik.

Veteran performer Springsteen sang the song that in the 1960s was an anthem for African-American civil rights movement: "We Shall Overcome," and dedicated the song to those who lost loved ones in the attacks.

"For all of us who love democracy and tolerance, it's an international tragedy," he told the crowd.

Stoltenberg at a ceremony on Utøya, where Breivik gunned down 69 people at a summer camp for members of the Labour Youth League, said: "Let us honour the dead by celebrating life."

Stoltenberg was speaking to around 1,000 members of the league, the youth section of the Labour party, several of whom were survivors of the assault.

The audience bowed their heads as he spoke.

"Even now, after a year has passed, it is impossible to fully comprehend the extent of the fear and suffering…" on the island last year, he said.

Earlier Sunday, Stoltenberg said that despite the great suffering Breivik had caused, he "failed to achieve what he set out to do. The people triumphed".

The prime minister also met relatives of those killed and laid a wreath on the island.

The island ceremony began with a minute of silence and two songs sung by survivor Renate Taarnes, who saw her boyfriend killed.

Some of those present at the ceremony were overcome with emotion and had to leave early, but there were hugs and laughter amid the tears.

"Even though we carry a heavy burden, we are still standing," said Eskil Pedersen, leader of the party's youth wing, who was one of those who escaped the massacre.

"He took some of our loveliest roses, but he could not stop the springtime."

Earlier, dozens gathered on Utøya to leave flowers and stones engraved with the names of Breivik's victims in a tribute to family members killed in the attack.

"I was a pastor for many years and helped many people in mourning," Roald Linaker told public television broadcaster NRK.

"But I never fully understood that it hurt so much," he added. Linaker lost a son in the attack.

"We victims live with what happened on July 22nd every day," said Viljar Hanssen, who lost an eye in the attack.

"Families of the victims live with July 22nd every day. The absence of those taken from us will be just as intense tomorrow," he told NRK.

"Whether the calendar says it's April 20th or July 23rd makes little difference to me," he added.

Stoltenberg began Sunday's commemorations by laying a wreath near the spot where the bomb went off at the government building. From there, he joined Norway's king and queen at a memorial service at Oslo's cathedral.