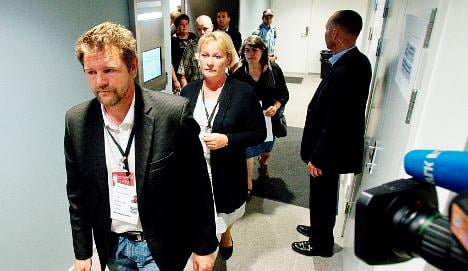 More than 30 people stood up and walked out of courtroom 250 at the Oslo district court when lead judge Wenche Arntzen said it was time for Breivik to speak.

"He has a right to talk. We have no duty to listen," Christian Bjelland, the vice chair of the support group for survivors of the July 22nd attacks and victims' families, told the NTB news agency.

Breivik has asked the court to give him an hour to make final comments, in addition to the several days at the beginning of the 10-week trial dedicated to his testimony.

"Listening to him makes us sick, so many of us intend, when he is given a chance to talk, to calmly and quietly walk out," Bjelland said before the protest action.

Earlier on the last trial day, 11 months to the day after Breivik's attacks, his main lawyer Geir Lippestad rejected a prosecution call for him to be shut in a psychiatric ward, insisting the confessed killer was sane and should be sent to prison or set free.

Shortly before Breivik took the stand, the Oslo district court had also heard heart-wrenching testimony from five people who lost a loved one in the July 22nd attacks.

That day, Breivik first set off a car bomb outside government buildings in Oslo, killing eight people, before going to Utøya island, north-west of the capital where he shot and killed another 69 people, mostly teenagers.

The victims, the youngest of whom had just celebrated her 14th birthday, had been attending a summer camp hosted by the governing Labour Party's youth organisation.