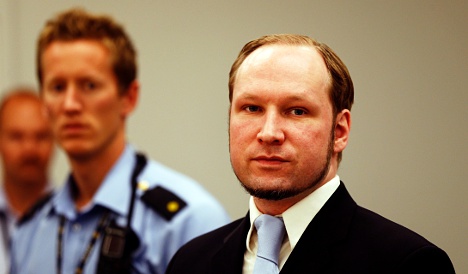 The 33-year-old right-wing extremist used the 45 minutes accorded him to make final remarks Friday to claim that his attacks were necessary to defend Norway against multiculturalism and a "Muslim invasion".

"The July 22nd attacks were preventive attacks in defence of my ethnic group and I can therefore not acknowledge guilt. I was acting on behalf of my people, my religion and my country. I therefore demand that I be acquitted," Breivik said in conclusion.

During his ideological speech, Breivik among other things blasted US television series "Sex and the City" for encouraging women to not establish families and singers of immigrant origin representing Norway in the Eurovision Song Contest.

Addressing the five Oslo district court judges, he said: "The judges sitting here today can judge me as they wish."

But "history will show whether they judge a man who tried to stop evil," he said, insisting he "carried out a small barbarism to stop a greater barbarism."

Shortly before Breivik took the stand, the Oslo district court heard heart-wrenching testimony from five people who lost a loved one in the July 22nd attacks.

"To inherit your child's cups and plates, is just crazy," Kirsti Sofie Løvlie said, recalling how painful it had been to go through her 30-year-old daughter Hanne's apartment after she was killed in the Oslo bombing.

"This is my trial. I am sure the court will give a correct verdict … He will never get out again. I will not spend much time and effort on this man," she said, prompting loud applause from the courtroom.

Utøya survivor Lara Rashid, whose elder sister Bano was killed on the island, meanwhile drew sobs from onlookers when she spoke of her pain at knowing her sister would not be there on her wedding day, to see her children, or for the confirmation of their younger brother.

Earlier on Friday, Breivik's main defence lawyer Geir Lippestad rejected the prosecution's call for Breivik to be locked up in a psychiatric institution and that he be given the "mildest possible" prison term.

Although there is no chance Breivik will be acquitted, the defence lawyer was also formally obliged to request that he be set free since he has pleaded not guilty.

On July 22nd, 2011, Breivik first set off a car bomb outside government buildings in Oslo, killing eight people, before going to Utøya island, north-west of the capital where he shot and killed another 69 people, mostly teenagers.

The victims, the youngest of whom had just celebrated her 14th birthday, had been attending a summer camp hosted by the governing Labour Party's youth organisation. 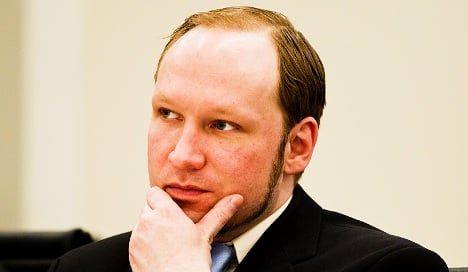 Philip Manshaus appears in court on August 12. Photo: Cornelius Poppe / NTB Scanpix / AFP
Philip Manshaus, 21, was remanded in custody Monday, suspected of murder and a “terrorist act” that police say he filmed himself committing.
Answering police questions on Friday, “the suspect admits the facts but has not taken a formal position as to the charges,” Oslo police official Pal-Fredrik Hjort Kraby said in a statement.
Manshaus is suspected of murdering his 17-year-old step sister Johanne Zhangjia Ihle-Hansen, before entering the Al-Noor mosque in an affluent Oslo suburb and opening fire before he was overpowered by a 65-year-old man.
Just three worshippers were in the mosque at the time, and there were no serious injuries.
Manshaus appeared in court this week with two black eyes and scrapes and bruises to his face, neck and hands.
Police have said he has “extreme right views” and “xenophobic positions” and that he had filmed the mosque attack with a camera mounted on a helmet. He had initially denied the accusations.
The incident came amid a rise in white supremacy attacks around the world, including the recent El Paso massacre in the United States.
Norway witnessed one of the worst-ever attacks by a rightwing extremist in July 2011, when Anders Behring Breivik, who said he feared a “Muslim invasion”, killed 77 people in a truck bomb blast near government offices in Oslo and a shooting spree at a Labour Party youth camp on the island of Utøya.
BREIVIK
Breivik defence urges ‘mildest possible penalty’