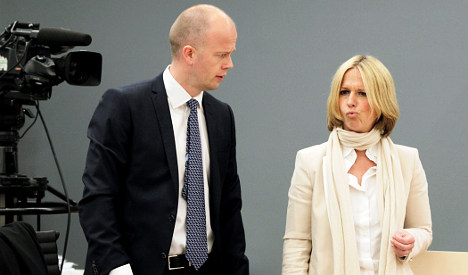 Prosecutors Inga Bejer Engh and Svein Holden were expected to speak for several hours, at the end of which they will ask the court to either send Breivik to prison or a closed psychiatric care unit.

"July 22nd, 2011 was and is still a national trauma. Thousands of people were directly or indirectly affected," Bejer Engh told the Oslo district court.

She cautioned that many of the most pressing questions in the case, including how "a citizen became a murder machine", probably would not be sufficiently answered to satisfy those affected.

On July 22nd, Breivik first set off a car bomb outside government buildings in Oslo, killing eight people, before travelling to Utøya island, north-west of the capital, where he spent more than an hour methodically shooting and killing another 69 people, mostly teenagers.

The victims had been attending a summer camp hosted by the governing Labour Party's youth organisation.

"I find it difficult to find words to describe the 80 minutes he spent … with only one goal: to kill as many people as possible," Bejer Engh said.

Breivik has told the court his acts were "cruel but necessary" to protect Norway from a wave of multiculturalism and a "Muslim invasion".

Bejer Eng said that instead of instigating fear with his descriptions of the alleged Knights Templar network prepared to carry out other attacks, Breivik had instead painted a "tragic picture" of a young man so eager to appear important that he dreamed up a non-existing network.

The prosecution will base their request to the court on psychiatric evaluations of the 33-year-old right-wing extremist's mental health which have sharply contradicted each other.

In the formal indictment presented in March, in which Breivik was charged with "acts of terror", the two prosecutors called for him to be sent to a high-security psychiatric unit, but left the door open to change their minds if new information were to surface about his mental health.

They adopted that line based on the sole psychiatric evaluation that had been completed at the time which diagnosed Breivik as insane, suffering from paranoid schizophrenia and therefore not responsible for his actions.

That conclusion caused an uproar in Norway, with many stunned to learn that the man who spent years secretly and meticulously planning his twin attacks could not answer for what he did.

The Oslo district court then ordered a second opinion which contradicted the first one, finding him sane, as did a number of other psychiatrists who observed Breivik in detention and in court.

These experts all agreed that Breivik is not suffering from a psychosis, but rather some form of personality disorder — which would mean he could be sentenced to prison.

Bejer Engh on Thursday however appeared initially to be taking the line of the first report, leading at least one commentator to speculate the prosecution would ask for Breivik to be declared insane.

An opinion poll published on Thursday indicated 74 percent of Norwegians want Breivik to be sent to prison, while only 10 percent think he should be sent to an insane asylum.

Breivik himself wants to be officially declared sane in order to ensure that his Islamophobic ideology is not written off as the ravings of a lunatic, and has said court-ordered psychiatric confinement would be "a fate worse than death."

If found sane, Breivik faces Norway's maximum prison sentence of 21 years behind bars, a sentence that can be extended as long as he is considered a threat to society.

If he is found criminally insane, he could spend the rest of his life in psychiatric care.

In order to sentence him to prison, the judges must be convinced that he is sane "beyond reasonable doubt", a legal term that lacks a clear definition.

The prosecution's closing arguments on Thursday are therefore crucial in either emphasising or eliminating doubt on the question.

The trial, which opened on April 16th, concludes on Friday with the defence lawyers' closing arguments. They are expected to call for Breivik to be acquitted, since, despite his confession, he has pleaded not guilty.

Alternatively, they will ask that he be found sane and sent to prison.

The Oslo court is expected to announce its verdict on either July 20th or August 24th.