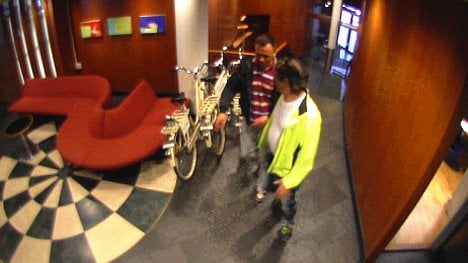 The brutal assault took place on a pedestrian bridge between Oslo’s central train station and bus terminal at around 1pm on June 6th.

In an apparently unprovoked attack, the main assailant kicked the woman so hard that she fell out of her wheelchair and was knocked unconscious.

The primary suspect was wearing a black jacket with the initials SATS on the back. The other man was wearing a yellow jacket and accompanied the alleged aggressor before, during and after the attack.

Both men have what police described as a Nordic appearance. The man in the black jacket is around 180cm tall and appears to have a muscular physique, police said. The second man is around the same height and has a sturdy build.

Oslo police have asked anybody who may have witnessed the attack, or may have information about the suspects, to contact them at: 22 66 99 66.