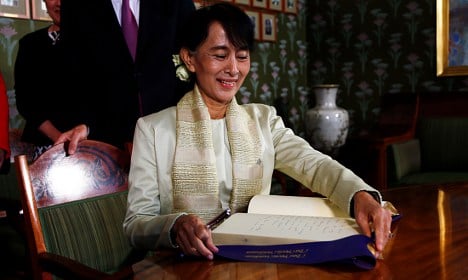 Giving her Nobel lecture in Oslo 21 years on, she said the award committee "were recognizing that the oppressed and the isolated in Burma were also a part of the world, they were recognizing the oneness of humanity".

Suu Kyi — who has campaigned since 1988 for democracy in the long military ruled country also called Myanmar — said that "often during my days of house arrest it felt as though I were no longer a part of the real world".

Aung San Suu Kyi also pledged to keep up her struggle for democracy as she finally delivered her Nobel Peace Prize speech, 21 years after winning the award while under house arrest.

After a year that has seen sweeping changes in her Southeast Asian homeland, Suu Kyi pledged to work for national reconciliation but also pointed to remaining political prisoners and continued ethnic strife in her country.

"My party, the National League for Democracy, and I stand ready and willing to play any role in the process of national reconciliation," said Suu Kyi, delivering her speech in Oslo for the 1991 Nobel Peace Prize.

Wearing a flower in her hair, a sarong and a purple silk scarf, she looked emotional as she received a thunderous standing ovation in the cavernous Oslo City Hall, packed with dignitaries, royals and Burmese exiles.

The veteran activist also said she encouraged "cautious optimism" in her country's transition from military rule towards democracy under the quasi-civilian government of ex-general President Thein Sein.

Although the government has signed ceasefires with scores of ethnic rebel groups, she pointed to continued bloodshed — conflict with the northern Kachin Independence Army and communal unrest between Buddhists and a Muslim minority.

"Hostilities have not ceased in the far north. To the west, communal violence resulting in arson and murder were taking place just several days before I started out on the journey that has brought me here today," she said.

Fifty people have been killed and scores wounded in the recent clashes in Rakhine state, state media said Saturday, as the United Nations warned of "immense hardship" faced by thousands displaced by rioting.

When Suu Kyi won the honour in 1991, she could not accept it in person, fearing she would be blocked from returning to the country also called Burma where "The Lady" had become a potent symbol of non-violent defiance.

Her husband Michael Aris and their two sons, Kim and Alexander, accepted the award on her behalf. When her husband died of cancer in 1999, Suu Kyi could not be by his side, again fearing she would not be allowed to come home.

Suu Kyi — who has campaigned since 1988 for democracy in the country also called Burma — said that "often during my days of house arrest it felt as though I were no longer a part of the real world".

This week, back in Europe for the first time in 24 years, Western supporters and Burmese exiles are cheering her along a whirlwind tour that started in Switzerland and will also take her to Britain, Ireland and France.

In Norway, she has been greeted with flowers and songs by jubilant Burmese, many with her party's Fighting Peacock flag painted on their faces.

Suu Kyi called for the release of the country's remaining political prisoners, warning of the risk that "the unknown ones will be forgotten".

Saying said that "one prisoner of conscience is one too many", she urged the audience of her Nobel speech: "Please remember them and do whatever is possible to effect their earliest, unconditional release."

Suu Kyi — who turns 67 next week and who fell ill in Switzerland, blaming the strain of jetlag and exhaustion — said Friday that she was on a journey of "rediscovery and discovery, seeing the world with new eyes."

She thanked all "lovers of freedom and justice who contributed towards a global awareness of our situation", telling her audience it was "because of recent changes in my country that I am with you today".