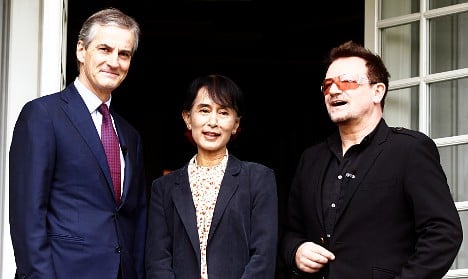 "I'm star-struck," admitted the Irish singer, who has long supported her freedom struggle and dedicated the song "Walk On" to her, when they met at a peace forum in Oslo, Suu Kyi's latest stop on a five-nation Europe tour.

Nobel Peace Prize laureate Suu Kyi has herself received superstar treatment and been cheered by crowds of many thousands as she visited Norway on herb first Europe trip in a quarter-century after years of house arrest.

Long isolated, threatened and vilified by one of the world's must repressive dictatorships, she has recently rejoined mainstream politics in a changing country, while many of her party members have been freed from prison.

On Monday, Suu Kyi hosted a panel with Bono, who has long used his star power to promote rights and fight poverty, and who recalled a global U2 concert tour where video messages from Suu Kyi were played from giant screens.

"Suu Kyi came on the road with us," the stubble-faced rocker quipped at their joint press conference. "Seven million people we played to. She was there every night. A digital version, but she's very good live!

"And she made a real connection with our audience… telling them that their voices were powerful and that they could be heard all the way to Burma."

Bono recalled that at the shows, not everyone in the crowd knew who was behind the initials for the name Aung San Suu Kyi.

"We had a few people who would arrive with a T-shirt with 'ASSK' on and think she's a speed metal band from Asia," he joked. "It's great that in a U2 crowd not everyone is a political science student."

On a more serious note, he spoke of his admiration for Suu Kyi: "It's really her non-violent position that I find so impressive.

When Suu Kyi was asked whether she liked Bono's song about her and her family's struggle, Bono interjected: "She's a Bob Marley fan… So am I."

But Suu Kyi was quick to praise his work: "I like the song because it's very close to how I feel, that it's up to you to carry on.

A thankful Bono replied about the song that "I'm amazed that this has been taken to her heart and the hearts of others."

Then he added on a lighter note: "You never know. If the song was shite, it could have made matters a lot worse."

Suu Kyi, speaking earlier on the need to fight injustices and help people, paid her own compliment to Bono.

Bono was later on Monday expected to give Suu Kyi a lift aboard his private jet to Dublin, where she will be feted at the "Electric Burma" tribute concert hosted by Amnesty International.

Later around 5,000 people were due at a public event to sing "happy birthday" to Suu Kyi, who turns 67 on Tuesday in her former family home Britain, the next stop of her whirlwind Europe visit.