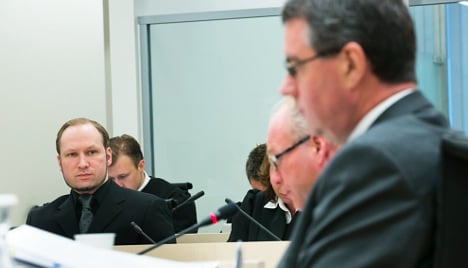 Psychiatrist Terje Tørrissen took notes on the letters in order to document the sort of responses the 33-year-old right-wing extremist has received since carrying out the July 22nd attacks.

“They were clear declarations of support,” Tørrissen told the Oslo district court on Monday.

“They support both his ideology and the operation itself.”

He described reading adoring love letters to Breivik from 16-year-old girls. The sheaf of correspondence also contained marriage proposals, letters from religious groups wanting to convert him, and ringing endorsements of his actions from entire families in Sweden.

The psychiatrist said he had noticed that many of the correspondents used the same sort of terminology as Breivik when describing how they view the world.

“One person also wrote that politics has become more extreme as a result of his actions,” he said.

Tørrissen's colleague Agnar Aspaas said Breivik tried to respond to as much of the correspondence as possible but was unable to reply to everybody because of the sheer volume of letters. Breivik also received a lot of hate mail, including two concrete death threats, Aspaas said.

Tørrissen and Aspaas said they had found it difficult to analyze Breivik's responses when compiling their report.

“He modifies himself, adapts, and answers the questions strategically,” said Tørrissen.

Unlike the psychiatrists who carried out the first tests on the prisoner, Tørrissen and Aspaas concluded that Breivk was sane at the time of the attacks and could be held criminally responsible.

The question of Breivik’s sanity is central to the case. If the court finds he was sane, he is likely to face the maximum sentence of 21 years, a punishment that may be extended if he is still considered a danger to society.

If deemed insane, a fate he wants to avoid, Breivik will instead face closed psychiatric care, possibly for life.

Judges are expected to present their verdict on either July 20th or August 24th.