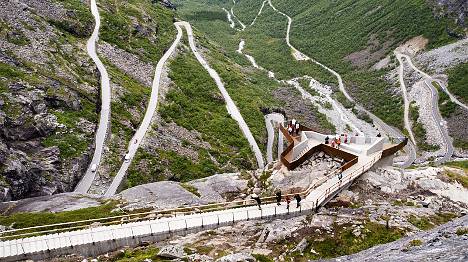 First opened in 1936, the snaking road winds past the Stigfossen Waterfall, around eleven hairpin bends, and offers breathtaking views of the mountainous terrain in Rauma, western Norway.

Despite protestations at the time that the project was lunacy, construction started on the road in 1928, twelve years after the Norwegian parliament gave it the green light.

The national tourist route will run from Geiranger to Trollstigen, a 106-kilometre stretch that includes a ferry ride across the Norddal Fjord.

Two government ministers will attend Saturday’s opening ceremony, while tour guides dressed as old-time farmers and horse traders will take people across the mountains on foot to demonstrate how things were done before the road was built.

Trollstigen becomes the 18th road in Norway to gain official status as a national tourist route.