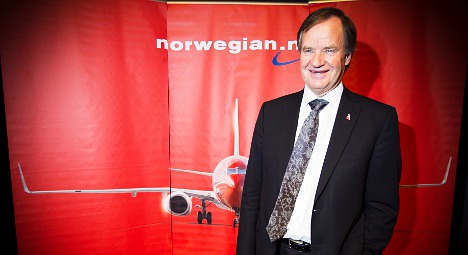 The order, initially placed in January, was part of a massive deal to acquire the latest fuel-efficient aircraft that will put Norwegian in a strong position to further erode the position of traditional carriers.

"Brand new, fuel-efficient aircraft are necessary for us to continue to grow," Norwegian chief executive Bjørn Kjos was quoted as saying in a statement.

The Airbus order is the first ever for the rapidly-growing Norwegian, whose fleet has until now consisted only of Boeings.

Norwegian, once a tiny regional player in Norway, has battered its main rival, beleaguered semi-public Scandinavian carrier SAS, since being restructured as a low-cost airline in 2002.

Kjos said at the beginning of this year it aimed to expand its fleet from 62 planes to 241 within 10 years and its European market share from two to six percent.

Airbus promises that the A320neo, which is due to enter service in 2015, will cut fuel consumption by 15 percent.

The announcement of the new version of its workhorse medium-range single-aisle aircraft last year set off a boom in orders from airlines that have been struggling with higher fuel prices, the top expense for many carriers. Rival Boeing later followed with its new version of the 737.