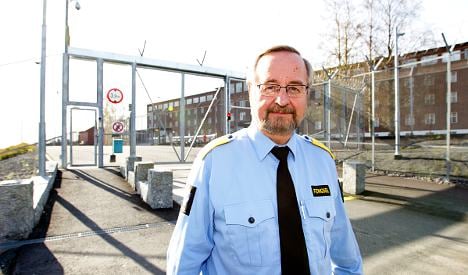 If jailed, Breivik could not have normal contacts inside the prison due to the risk of a hostage situation, Ila prison director Knut Bjarkeid told the Verdens Gang (VG) daily.

"Many of the measures surrounding Breivik are being created to avoid a hostage-taking, which would be the only way for him to get through all the different layers of security that have been established between him and freedom," he told the paper.

"That makes it impossible to allow normal contact with others," he added.

To avoid keeping the confessed killer in total isolation, the high security prison, north-west of Oslo, could let him play sports with the guards and hire someone to play chess with him, among other things, he added.

"We are planning a professional community around him, with employees and hired personnel," he told the paper.

Bjarkeid did not know how much the measures would cost.

Norwegian law forbids keeping prisoners in total isolation for long periods of time because it is considered an unduly cruel punishment.

On July 22nd 2011, the today 33-year-old right-wing extremist first bombed a government building in Oslo, killing eight people, before going on a shooting rampage on the nearby island of Utøya, where the ruling Labour Party's youth wing was hosting a summer camp.

He killed 69 people on the island, most of them teens.

Breivik has confessed to the twin attacks but has refused to plead guilty, insisting they were "cruel but necessary" to stop the ruling Labour Party's "multicultural experiment" and the "Muslim invasion" of Norway and Europe.

While he has been charged with committing acts of terror, the focal point of his ongoing trial is to determine the question of his sanity. That in turn will decide whether he will be sent to prison or a closed psychiatric ward.

A first court-ordered psychiatric evaluation conducted last year said Breivik was psychotic, suffering from "paranoid schizophrenia" and therefore not responsible for his actions. A second opinion however concluded that Breivik was sane enough to be held responsible.

If found of sound mind when the five Oslo district court judges hand down their verdict in July, he will likely face Norway's maximum 21-year prison sentence. That term can be extended for as long as he is considered a threat to society.