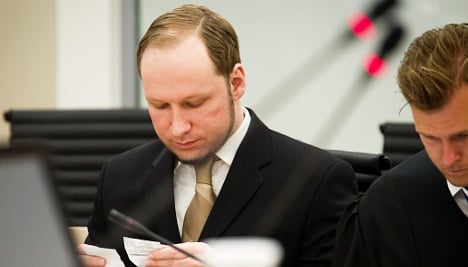 Testifying on the 26th day of the 33-year-old right-wing extremist's trial, a man who has known him for over two decades also revealed that Breivik was very concerned about how he looked and was known for using powdered make-up.

The friend, who requested anonymity, sketched a portrait of an ordinary individual, intelligent, good at school and sociable, but who had begun isolating himself after secondary school.

"He did not stand out from the pack," the 32-year-old witness told the Oslo district court.

"He was rather tolerant and never looking for trouble," he said, adding though that he had heard rumours of a few violent episodes.

"I never saw him as extreme," he stressed.

However, in 1999 at the age of 20, Breivik, suddenly underwent an operation to make his nose look "more Aryan".

But this detail did not surprise his group of friends, who merely teased their friend, who was also known for using powdered make-up, for his vanity.

Breivik, who has claimed to be on a "crusade" against multiculturalism and a pending "Muslim invasion" of Norway and Europe, has meanwhile insisted that his nose was broken when he was attacked by a Pakistani, but none of the friends he claims were there at the time say they recall the event.

According to the witness who is a fireman, Breivik was "a bit special" at this time, with very personal clothing choices, including wearing sunglasses when he went out to bars at night.

Breivik's relationship to his best childhood friend became more distant when the latter left to live abroad in 2003, which is when the confessed killer began isolating himself from friends and spending most of his time playing video games and launching short-lived start-up companies.

After the witness returned to Norway in 2008, he had just sporadic contact with Breivik, he told the court.

The two men had last seen each other at a dinner party in April 2011.

"I didn't notice anything in particular," the fireman said.

Three months later, on July 22nd, Breivik first bombed a government building in Oslo, killing eight people, before massacring 69 others on the small island of Utøya, northwest of the capital, where the ruling Labour Party's youth wing was hosting a summer camp.

Most of those Breivik killed during his more than hour-long shooting rampage on the island were teens. The youngest victim had just celebrated her 14th birthday.