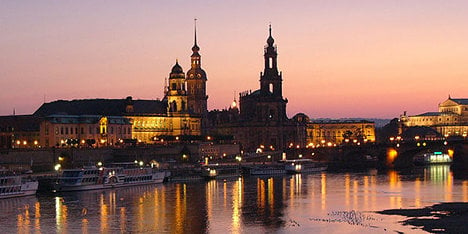 Its two main tourist draws are the stunning cities of Leipzig and Dresden. Along with impressive architecture, vibrant cultural scenes and picturesque backdrops, they are also the perfect bases to explore further into central Europe by train.

The second city of Saxony will greet you with a big bang on arrival. The central station is the largest in Europe by floor area with its 24 platforms housed in six train sheds. Leipzig has long been known as an important trade city since 900 AD, thanks to its location at the intersection between two important trade routes. The city’s famous trade fair continues that tradition today.

But business mixes with musical pleasure. Leipzig became a centre for classical excellence in the 17th and 18th century as the place where two of Germany’s most famous composers, Johann Sebastian Bach and Felix Mendelssohn, lived and worked. Bach was choirmaster at the Lutheran St. Thomas Church (Thomaskirche) where he was laid to rest. Regular concerts of his cantata’s and services featuring the famous boy’s choir Thomaschor remain popular. Organists can even visit and play the very instrument where the maestro himself composed.

A statue of Felix Mendelssohn was erected outside the church in 2008, after the Nazis destroyed the original in 1936. Mendelssohn founded the Leipzig Conservatoire (now the University of Music and Theatre) in 1843 – the oldest university school of music in Germany.

The city's oldest church St. Nicholas Church (Nikolaikirche) was built in 1165 and, with its striking Gothic style, is also popular among visitors. The building is most famous as the scene of the Monday demonstrations in 1989, the start of a peaceful revolt against communist rule. For an intriguing insight into the past, visit Museum in der Runden Ecke (Museum in the Round Corner) – the original city headquarters of the Stasi has been kept exactly how it was found in the late 80s. Through documents and surveillance equipment it present a fascinating look into the inner workings of the secret police.

For a unique view of the city, climb the 500 steps to the viewing platform of the Battle of the Nations monument. Built in 1913 to commemorate Napoleon’s defeat in Leipzig a century before, it is the largest war memorial in Europe and stands 91 metres tall, allegedly on the spot where Napoleon ordering his troops to retreat.

In between sightseeing, stop off for a respite at Mädlerpassage, a quaint shopping arcade filled with an array of boutiques. Ensure to pay a visit to Auerbachs Keller – a restaurant that can cite Johann Wolfgang von Goethe as one of its former local patrons. He was a regular during his student days in the city and marked it with a mention in a scene from Faust I.

The biggest family attraction is Leipzig Zoo, with its sprawling grounds and botanical gardens close to the city centre. A modern take on the traditional zoo, it concentrates on conservation and animal protection. There are 850 species of animals from around the world and a newly-opened tropical rainforest the size of two football pitches to explore.

Why not combine your stay in Leipzig with a day trip to the German capital? Berlin is just 200 kilometres away and only 75 minutes on the express ICE train.

Alternatively, take a longer scenic route into Bavaria and a three-hour journey that allows you to enjoy the spectacular views along the River Saale towards Nuremberg – unspoilt nature and serene valleys lined with fairytale castles come guaranteed.

The capital of Saxony and Germany’s fourth largest city is situated in a valley on the River Elbe, a waterway lined with meadows that snakes its way 23 kilometres through Dresden. The contrasting architectural styles in the heart of the old town are a throwback to realities of World War II and the controversial aerial attack in 1945. Previously, the city was referred to as the Jewel Box, because of its baroque and rococo buildings and many were rebuilt including the Semper Opera. Elaborate and ornate in Renaissance style, it houses a packed programme of opera, ballet and jazz performances as well as being open for guided tours.

Local residents began a campaign and raised private funds to complete the restoration of the famous Frauenkirche (The Church of Our Lady) cathedral in 2005, a year before the city celebrated its 800th anniversary. Since the re-opening, it has been one of the cities biggest tourist attractions with over seven million visitors in the first three years alone.

The Zwinger Palace hosts galleries and gardens in a museum complex comprising the Old Masters Picture Gallery with works by Rembrandt, Rubens and Raphael. For a glimpse of sheer opulence, visit the two Green Vaults in Dresden’s former Royal Palace. Founded by Augustus the Strong in 1723 there are over 1,000 artefacts and treasures from around the world including gold, amber, ivory and the Dresden Green Diamond, the only large naturally green diamond ever to be found.

Take time to soak in the natural surroundings on offer – Dresden is one of the greenest cities in Europe with over 60 percent of the city covered by forest and green space. Protected gardens and parks are scattered around the city along with four nature reserves in close proximity. An hour’s bike ride from the city centre along the Elbe Cycle Path takes in vineyards, riverside palaces, beer gardens and former villages by the river bank.

For the alternative side of Dresden, step into the Neustadt neighbourhood. Home to the city’s student population it comes complete with a pulsing nightlife and vibrant cultural scene. Admittedly, it may not have the sights of the historical inner city, but with its narrow streets, funky shops and bohemian feel, this is where the fun is to be had for younger visitors.

Make the most of your stay by conveniently taking in another country and another capital by train. Close to the Czech border, a day trip to Prague is just 150 kilometres and two hours and 20 minutes away.

On leaving the city, follow the Dresden skyline reflected in the River Elbe while the beauty of the  Elbe Valley awaits. Further on, the colossal rocky cliffs of the Sächsische Schweiz National Park tower above a number of pretty, colourful villages. Once across the border, the train follows the Vitava River at lník, providing more waterside views before arriving in the popular Czech capital of Prague.

For information on the InterRail Pass range and where to buy click here.