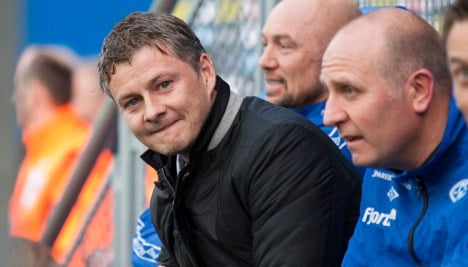 The 39-year-old had talks with Villa on Friday, the English Premier League club left managerless after Alex McLeish was fired.

"I have not had any offers," Solskjær told a press conference on Saturday. "I'm not looking for another job."
"In football, and in life in general, things turn up that you have to make decisions about. I have a contract for two more years and I'll stand by that."
Speculation that Solskjær was being considered for the Aston Villa post accelerated on Friday after reports that Villa owner Randy Lerner's private jet had been spotted in Kristiansund. Molde confirmed on Friday morning that they had given Aston Villa permission to speak to their highly-rated young manager.
Solskjær was subsequently flown to Birmingham on Friday for talks with Aston Villa officials.
But he returned to Norway late Friday to learn that Molde's billionaire backer Kjell Inge Rokke had pulled the plug on his company's 20-year support, which included building the club a new stadium in the late 1990s, as a result of the Villa talks.
But Solskjær defended his decision to meet with Aston Villa, meaning that he missed a training session with Molde ahead of their weekend match against Sandnes Ulf.
"I felt I owed myself to visit them. I have said no to several Premier League clubs this week. Finally, there comes a point where you want to talk to them, get acquainted and see what happens," Solskjær told the NRK daily after the match which ended 2-0 to Molde.