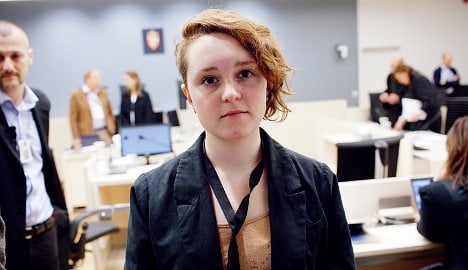 Ingvild Leren Stensrud, who suffered bullet wounds in her thigh and her shoulder when Breivik went on his bloody rampage on Utøya in July last year, said she played dead in the cafeteria, hidden by her friends' bodies.

As the sound of gunshots receded, Stensrud said she heard "what sounded like battle cries" but was not able to make out what Breivik was saying.

She also described how she heard numerous cell phones ringing and going unanswered at the massacre scene, where Breivik gunned down 69 people, most of them teenagers attending a summer camp of ruling Labour Party's youth wing.

With one dead body slumped over her and surrounded by others, she used a victim's cell phone to call her family. But when the same phone rang again and the caller ID showed "Mum", she didn't have the heart to answer.

Breivik is on trial charged with committing terrorist acts over the Utøya massacre on July 22nd of last year and the killing of eight people in the bombing of a government building in Oslo shortly before.

The 10-week trial is largely focused on the issue of his sanity to determine whether he will be sent to prison or to a mental institution, and witness testimonies are crucial to establish his behaviour during the killings.

A first psychiatric exam found him insane but a second opinion drew the opposite conclusion.

The 33-year-old right-wing extremist is intent on proving that he is sane so that his anti-Islam ideology, as outlined in a 1,500-page manifesto, will not be considered the ravings of a lunatic.

Breivik has confessed to the killings but has refused to plead guilty, insisting they were "cruel but necessary" to stop the Labour Party's "multicultural experiment" and the "Muslim invasion" of Norway and Europe.

If he is found criminally insane however, he will be sent to a closed psychiatric care unit for treatment.