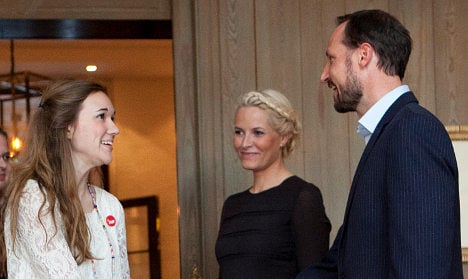 Despite the horror of her experience, the secretary of the Labour Party’s youth wing lightened the mood in the courtroom with a voice and presence filled with enthusiasm and vitality.

The 22-year-old survivor told the court how Anders Behring Breivik’s shooting rampage had left her with injuries to her hands, jaw, chest and face.

“I remember the feeling of being hit. It didn’t hurt, but I felt it immediately all the same. I lost feeling in both my hands and thought at first they had been shot off,” she said.

She spoke too of tasting a strange mixture of bullet and blood in her mouth after she was shot.

“I remember all the shots that hit me. First in the arms: ‘I can survive this’, I thought. Then in the jaw: ‘This is more serious’, I thought then. Then in the chest, and I thought: ‘I’ll die from this.’”

Somehow, though, she managed to run out of the building and begin her escape.

“I ran to the exit but noticed that I didn’t have control over my body and thought: ‘Now I’m going to die; this is what it’s like to die”.

Outside the building, she came to a halt.

“There was an awful lot of blood, and I tried to stop it. But the blood was everywhere, and if you’ve been shot that many times you just don’t have enough hands. And the hands weren’t working all that well anyway.

“I called out several times: ‘I’ve been shot; I’m going to die’. But when I looked at the situation around me I realized that I wasn’t the only one who had been shot, that this was a lot bigger than just me,” she told the court.

She was then carried from the scene by her friend Ole Martin Juul Slyngstadli, 18.

“I’ve never seen anyone run so fast or be so strong,” she said.

A small group of people then helped her hide in the woods, treating the badly wounded woman with bandages fashioned from their own clothes.

Breivik passed the group one more time, but failed to look in their direction as he made his way towards the Pump House where he went on to kill 14 more people.

“The first thing that comes into my head after hearing this witness’s testimony is ‘vitality’,” prosecutor Inga Bejer Engh told news agency NTB.

“The fact that there was laughter in the court immediately felt a bit strange in light of what we were actually talking about. But I think she was so funny that there was nothing disrespectful about her.”