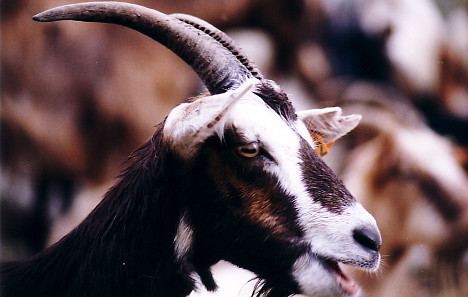 The goat in the picture is not Jesus (File photo: Emmanuel Wuyts)

Dramatic scenes unfolded on a small island off the south coast of Norway on Saturday evening when Jesus the billy goat got gruff with a mother and her child.

The terrified holidaymakers sought shelter in a tree while the father of the family called the police.

“It charged straight at a constable, leading to what can only be described as a fight between the two. It was really angry,” police officer Børge Steinsland told fvn.no.

When Jesus refused to relent, the officers had little choice but to whip out the weapon nearest at hand, Steinsland said.

“They were quite simply forced to use pepper spray to drive the wild animal away.”

The animal’s owner, Tor Brede Launes, conceded that the attacks on police and civilians spelled the end for the five-year old goat.

“Clearly he can’t behave like this. He’ll probably be replaced by Midsummer,” he said, adding that Jesus was destined for the barbecue.

But if he wants to eat Jesus, he’s going to have to find him first; the goat went underground after the police’s island raid at Fugløya.

Tor Brede Launes first tried whistling, before attempting to lure the goat with grain.  Then he took his boat out to scan the periphery of the island, but the beast with the biblical name remains at large.

“It does feel a bit unusual to take the boat around the islands calling out for Jesus,” he said.