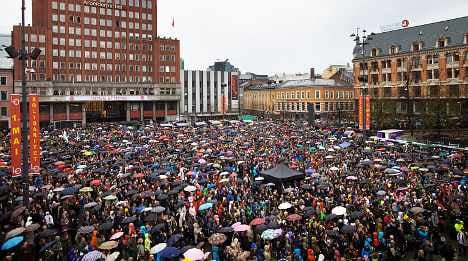 Some 40,000 people, according to police, massed in the rain at a square near the Oslo district courthouse where Breivik is on trial for his July 22nd attacks that killed 77 people, to sing "Children of the Rainbow" by Norwegian folk singer Lillebjørn Nilsen.

Inside the court, the 33-year-old accused right-wing extremist sat listening without showing emotion to powerful testimony from survivors of his bloodbath on the ninth day of his trial.

Drawn by an internet campaign, the protestors streamed into Youngstorget Square wearing colourful raincoats and carrying Norwegian flags and roses, which have come to represent Norway's peaceful response to the horrifying attacks.

The culture ministers of the Nordic countries were also at the square to participate, while other similar events were to take place across Norway.

Nilsen led the chorus as the crowd, including many children who came with their nursery and elementary schools, sang along, waving roses in the air.

Afterwards they walked slowly together, still singing the song, to the courthouse to add their roses to the piles of flowers already lining the security barriers outside in memory of Breivik's victims.

Breivik last Friday told the court that Nilsen was "a very good example of a Marxist" who had infiltrated the cultural scene and that his song was typical of the "brainwashing of Norwegian pupils."

In reaction to his comments, two Norwegians launched a Facebook campaign calling on the public to "reclaim the song" and sing it together near the courthouse.

"I felt like he was trampling on a song I grew up with and that I sing to my child," Lill Hjønnevåg, one of those who initiated the protest, told public television network NRK.

The song is an adaptation of US folk singer Pete Seeger's "My Rainbow Race" and is very popular in the Scandinavian country. Its chorus goes: "Together, we will live, each sister and each brother, small children of the rainbow and a green earth."

Nilsen has rejected Breivik's interpretation of the song.

"In fact, it's not about people, it's about protecting the environment," he told daily Aftenposten.

On July 22nd, 2011, Breivik first set off a bomb near government offices in Oslo, killing eight people, before going to nearby Utøya island where he killed 69 people, mostly teens, attending a Labour Party youth camp.

While he has confessed to carrying out the twin attacks, he refuses to plead guilty, saying his attacks were "cruel but necessary" to stop the ruling Labour Party's "multicultural experiment" and the "Muslim invasion" of Norway and Europe.

On Thursday, he listened emotionlessly as survivors of his Oslo bombing told the court of their experience on July 22nd.

Anne Helene Lund, a bubbly 24-year-old, described how the explosion hurled her out of the tower housing the prime minister's offices, where she had been working for the summer as a receptionist.

Seriously injured, she suffered massive memory loss: she said she remembers virtually nothing from the three years she spent studying law and had been forced to start over with studies at secondary school level.

Her doctor father Jan Henrik Lund described the atrocious injuries his daughter had suffered, telling the court she had come "just millimetres from death" and pointing out that she had been nicknamed "the miracle" by her rescuers.

"It was like living the best and the worst at the same time," he said of the moment he had finally found his daughter at a hospital, in a coma, on the evening of July 22nd.

"It was fantastic to find her alive, but awful to see her so injured," said Lund, who wept several times during his testimony.

Prosecutor Inga Bejer Engh and many spectators in the courtroom also cried openly, but Breivik himself continued to stare straight ahead, apparently unaffected by the testimony.