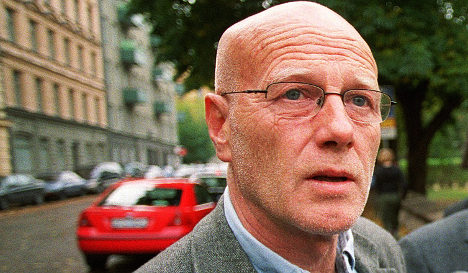 In mid-April listeners who tuned in to the show “Gerts Värld” (“Gert’s World”) could hear the host, Gert Fylking, say that Serbians were just like the mass murderer Breivik, currently on trial in Oslo.

“He is a controversial person, but this is probably the most serious thing he has done on radio,” said Christer Modig, CEO at MTG Radio to Swedish daily Dagens Nyheter (DN).

After saying that “the world is full of these Breivik characters”, Fylking continued along the same lines.

“We’ve managed to catch many others as well. We caught these Serbians who acted like bloody swine and killed hundreds of thousands of fleeing people. We caught them. But do you think they are judged by the Serbians? No, the Serbians hail them as heroes. So who are the psychopaths? Is it the majority of the Serbian population that are stupid or is it just these people who are convicted of war crimes that are idiots?,“ the host said, according to DN.

The paper reports that the show elicited strong reactions that have continued to spread to the Serbian media. The internet newspaper telegraf.rs describes how Fylking called the Serbian people “Breiviks”, “psychopaths” and “stupid”.

Serbia's ambassador to Stockholm, Dušan Crnogorčević, wrote a letter to the station to register his displeasure with Fylking's outburst.

“These are very serious allegations and completely untrue. As an individual I feel singled out but also as a representative for the Republic of Serbia,” the ambassador told DN.

“There are over 100,000 Serbs who live and work in Sweden and they feel singled out, horrified and angry that someone can categorize a whole population in this way,” he continued.

Fylking retracted his hasty words two days after the show had aired, but as the reactions continued to keep flooding in, the station nevertheless decided to suspend him indefinitely.

According to MTG's Modig, it is the host’s job to prompt reactions and get people to phone in to discuss controversial topics.

“But he phrased it clumsily, lumping everyone together and comparing a war to a crazed lunatic. That was unprepared and rash,” he said to DN.