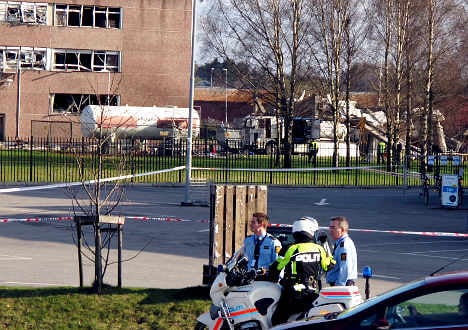 Despite early fears that five more people may have been trapped inside the building, police later said they believed there to be no further casualties.

Police asked people to stay away from the area where the blast occurred in a propane facility at the Mills dairy plant at 4.16pm. Factory chief Hilde Fløgstad said the explosion took place when a gas tank at the factory was in the process of being emptied and serviced.

The main factory building suffered major material damage, as did other buildings in the vicinity.

Jan Erik Amundsen witnessed the blast from a nearby Biltema car parts store, where he described hearing a violent explosion.

“The entire glass front blew in. The roof collapsed. There are trees lying across the road, blocking the entrance and exit,” said .

Monica Nordahl, a Biltema employee, was at work when the explosion hit.

“I felt my chest being squeezed in. At first I thought something had fallen down from the second floor,” she told newspaper Aftenposten.

“There was lots of broken glass. The windows were blown in. The goods lay all over the floor. The pressure was tremendous; I was standing right there. Everyone was shocked. I still have glass splinters on me.”

Synnøve Tilrem, who lives about half a kilometre away from the Mills plant, said her entire house was rocked by the blast.

“It was very clear that there was a gas explosion; we could feel the pressure in the air and there was a tremendous bang,” she said.

She added that there were a number of gas tanks located just outside the plant.