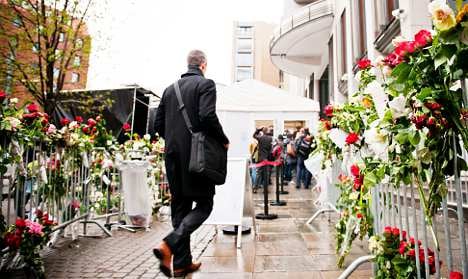 He also insisted that not only his victims and their families had their lives ruined on July 22nd: "I also lost everything," he lamented to the court.

For the first time since his trial started on April 16, the 33-year-old right-wing extremist voiced a small ounce of regret for his actions.

Breivik said: "I would like to offer a large apology" to those who were injured or killed in the bombing of an Oslo government building, as they were just passing by and had no political connections.

But when prosecutor Enga Bejer Engh asked if he wanted to say the same to any of the 69 people — mainly teens — he slaughtered in his shooting massacre on the nearby island of Utøya after the bombing, Breivik said: "No, I do not."

He reiterated that the youngsters attending a summer camp hosted by the ruling Labour Party's youth wing were "legitimate targets", since he claims they were "political activists" working for the "deconstruction of Norwegian society" through the multiculturalism he insists is leading to a "Muslim invasion" of the country.

Instead, he insisted that "everyone who is linked to the (government) and the Labour Party … should issue a large apology" to the Norwegian people.

In his own apology, Breivik mentioned in particular Kai Hauge, a 32-year-old man who was killed as he walked past the government building when it was bombed.

Hauge's mother Sølvi rejected the apology. "It is of course not enough," she told the Aftenposten daily's online edition, adding: "We will never get Kai back."

Jon Hestnes, who represents survivors and family of the victims of the Oslo bombing, meanwhile described Breivik's apology as surprising and insincere.

"I think it was pathetic. It doesn't help that he said that. There was no expression in his body language showing that he meant what he said," he told public broadcaster NRK.

On Friday, Breivik gave his account of events on Utøya, providing chilling details of how he calmly walked across the island, picking off his victims, one by one, shooting most of them point-blank in the head.

And on Monday, the sixth day of his trial, he faced cross examination from the prosecution about the deadliest massacre ever committed by a sole gunman.

He again described his massacre showing no emotion, and insisted it was "cruel but necessary."

He stressed the shooting spree had been a "gruesome" experience for him as well, and that he had to force himself to carry it out since it felt so "against human nature."

It was almost like "being asked to eat a plate of excrement," he said.

He explained his years of meditation to "de-emotionalize" himself as an "indoctrination technique … where I look at all political activists as monsters."

Yet when he was there, walking among the dead bodies, "I thought to myself that it was gruesome… I have never done anything so gruesome before," he said, acknowledging though that "it was probably more gruesome for the people I was hunting."

But, he insisted, "this is a small barbarity to avoid a larger barbarity."

He also stressed that not only the families of his victims had had their lives ruined.

"One should remember that on July 22nd I also lost … my entire family, all my friends… I also lost everything," he told the court.

When asked if he meant that people should feel sorry for him, he quickly responded: "Of course not."

Breivik, who was dressed as a policeman during his more than hour-long shooting spree, also told the court he tried to lure a large group out into the open at one point by telling them he was there to evacuate them.

While many seemed skeptical, "two or three seemed relieved (and) came towards me… Then I raised my Glock (pistol) and shot a girl in the head… There was panic (and) I shot the others too," he said.

He said he had not realized that so many people on the island would be under 18 — 33 of those killed were minors — but that he only considered the two 14-year-olds as children.

And even if he had known there would be so many youngsters present "I would do it again," he said, reiterating that he had wanted to kill all 569 people on the island that day.

He reiterated that he had spared the lives of two people, a girl and a boy, whom he deemed too young, and said he had not shot one man, Adrian Pracon, as "He did not look like a Marxist… He looked like someone like me."

"The reason he gave for not killing me was shocking," Pracon told the VG daily's online edition, recalling how the killer had pointed his rifle at him and then suddenly walked away.

"It is sickening that he played my god, that he decided over who would live and die," he added.

The confessed killer said several others in Norway were "more deserving of execution than the Labour Party youth," adding that if he had managed to attack a journalists conference, as originally planned, "I might have enjoyed" the slaughter.

Breivik had been scheduled to testify on Monday about his sanity, which is the main issue of contention during the trial, which is scheduled to last 10 weeks. But that was postponed until later so he could finish testifying about Utøya.

He has been charged with "acts of terror" and faces either 21 years in prison — a sentence that could thereafter be extended indefinitely if he is still considered a threat to society — or closed psychiatric care, possibly for life.

A first court-ordered psychiatric exam found him insane, while a second opinion came to the opposite conclusion.

A panel of experts who examined the validity of the second psychiatric evaluation have asked its two authors to provide additional information, noting several weaknesses in their report, the court announced on Monday.

The confessed killer wants to be found sane and accountable for his actions, so that his anti-Islam ideology, as presented in the 1,500-page manifesto he published online just before the attacks, will be taken seriously and not considered the ravings of a lunatic.

He lamented on Monday that his sanity was being questioned.

"If I had been a bearded Jihadi there would be no report at all… There would not be a need for a psychiatric evaluation," he said, maintaining he was the victim of "clear racism."