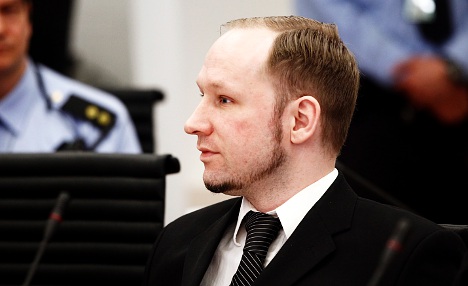 "There are only two legitimate outcomes of this case," he told the court: "Acquittal or the death penalty."

He acknowledged that neither was "realistic," since he has confessed to the attacks and Norway does not apply the death penalty.

If found sane, Breivik risks a 21-year jail term, which could then be extended indefinitely if he is still considered a threat to society. If found insane he could be sentenced to closed psychiatric care, possibly for life.

"I consider 21 years prison a pathetic punishment," he said, adding he thought it a shame that one of the judges hearing the case had been removed on Tuesday for having called for him to receive the death penalty the day after the July 22nd attacks.

Two psychiatric evaluations have drawn contradictory conclusions on Breivik's sanity, and ultimately it will be up to the judges to rule on them when they deliver their verdict sometime in mid-July.

Breivik, who has said his attacks were aimed at defending "ethnic Norwegians" from what he considers a Muslim invasion, also told the court two other cells were prepared to attack Norway.

"I am only one of very many militant nationalists in Norway and Europe … If our demands are not met this will happen again," he said, referring to his wish that the ruling Labour Party put an end to its generous immigration policies.

On July 22nd last year, Breivik first killed eight people when he set off a bomb in a van parked outside buildings housing the offices of Labour Prime Minister Jens Stoltenberg, who was not present at the time.

He then travelled to Utøya island where, dressed as a police officer, he spent more than an hour methodically shooting at hundreds of people attending a ruling Labour Party youth summer camp.

The shooting spree claimed 69 lives, mostly teens trapped on the small island surrounded by icy waters. It was the deadliest massacre ever committed by a lone gunman.

Breivik has entered a plea of not guilty, saying his acts were "cruel but necessary".