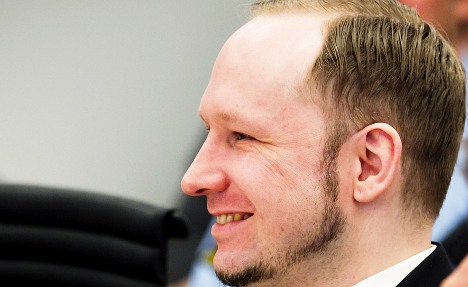 Breivik smiles on learning that a judge wanted him put to death (Photo: Heiko Junge/Scanpix)

"Yes, I would have done it again," Breivik told the court on the second day of the trial, adding that spending his life in prison or dying for his people would be "the biggest honour."

Meanwhile, one of the five judges hearing the case was dismissed after it was revealed he had written a message on a website the day after the killings suggesting Breivik should be sentenced to death.

In his testimony Breivik described his July bomb attack and shooting spree as "preventive" attacks to defend ethnic Norwegians and avoid a European culture war with Muslims, and asked the court to acquit him.

The judge interrupted his testimony after he spent his allotted 30 minutes presenting his Islamophobic and anti-immigration ideology.

The gunman had received permission to address the court from a prepared text, but was reminded by the judge to tone down his cynical, political rhetoric.

He described Oslo as a "multicultural hell", said "Christians today are a persecuted minority," and claimed that "rivers of blood caused by Muslims" are now flowing in European cities, citing Madrid, London and Toulouse.

On July 22nd, Breivik, now 33, killed eight people when he set off a bomb in a van parked at the foot of buildings housing the offices of Labour Prime Minister Jens Stoltenberg, who was not present at the time.

He then travelled to Utøya island where, dressed as a police officer, he spent more than an hour methodically shooting at hundreds of people attending a ruling Labour Party youth summer camp.

The shooting spree claimed the lives of 69 people, mostly teens trapped on the small heart-shaped island surrounded by icy waters. It was the deadliest massacre ever committed by a lone gunman.

He compared the Labour Party's youth wing AUF to the Hitler Youth, saying he targetted them on Utøya because "most AUFs are naive and indoctrinated."

"These were not innocent children, but political activists," Breivik argued, as survivors and relatives of the victims shook their heads in disbelief and grew impatient for him to finish.

Television and radio were banned from broadcasting his words.

Breivik described his attacks as "the most spectacular operation conducted by a militant nationalist this century."

Many had expressed concerns prior to the trial that Breivik would use his testimony as a platform to spread his ideology to the masses.

Day two of the trial began with Breivik entering the court and, for the second day in a row, making what he claims is a far-right salute, touching his heart with his right clenched fist and then extending it out in front of him.

But proceedings were quickly suspended after both the prosecution and the defence asked for the removal of one of the five judges because he had called for Breivik to receive the death penalty the day after the attacks.

"The death penalty is the only fair outcome in this case!!!!," lay judge Thomas Indrebø wrote on July 23rd last year.

"The lay judge himself has acknowledged that he made these comments on July 23rd," Arntzen told the court.

He was deemed unfit and replaced by one of two substitute judges, Anne Elisabeth Wisløff, already present in court.

The death penalty does not exist in Norway.

If he is found sane, Breivik risks a 21-year jail term, which could then be extended indefinitely if he is still considered a threat to society. If he is found insane he could be sentenced to closed psychiatric care, possibly for life.

Two psychiatric evaluations have drawn contradictory conclusions on his sanity, and ultimately it will be up to the judges to rule on them when they hand down the verdict sometime in mid-July.

On the first day of the trial on Monday, Breivik confessed to the attacks but entered a plea of "not guilty."

"I acknowledge the acts, but not criminal guilt," said Breivik, who is accused of "acts of terror."

He also told the judges he did not "recognize the Norwegian court."

Throughout Monday's proceedings, Breivik sat stoney-faced for almost an hour as prosecutors read aloud a long list of names of the dead and injured and recalled chilling details of his massacre.

He showed no emotion as the prosecution presented graphic surveillance footage of his Oslo bombing and a desperate emergency call from a young woman hiding in a bathroom as he went on his shooting rampage on Utøya island.

He did however tear up as the court viewed a 12-minute anti-Islam film he made summarizing his manifesto.

His defence lawyer Geir Lippestad said his client's tears appeared to be linked to his feelings that his attacks were "cruel but necessary … to save Europe from an ongoing war."