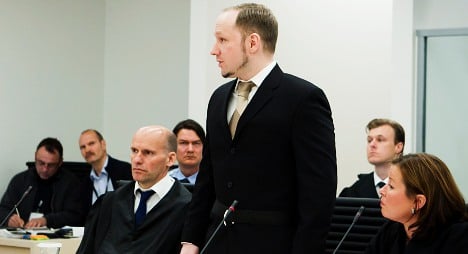 Prosecutors told the courtroom in Oslo that Breivik was responsible for the bloodiest chapter of modern Norwegian history as they read a roll call of his victims, showed footage of his bombing of government buildings, and played an emergency call from a young woman dodging bullets on the Utøya island.

But while Breivik showed no emotion at the evidence of his killings, his eyes welled up as the court viewed a 12-minute anti-Islam film summarising his manifesto which he posted online the day of the carnage.

"I acknowledge the acts, but not criminal guilt, and I claim legitimate defence," the 33-year-old, who is accused of "acts of terror," told the court.

Breivik, dressed in a dark suit and gold-coloured tie, told the judges he did not "recognise the Norwegian court."

Just moments earlier, he had touched his chest and extended his clenched right fist in front of him as his handcuffs were removed on his entry into the courtroom.

In the 1,500-page manifesto he posted online shortly before the July 22nd attacks, Breivik described the gesture as "the clenched fist salute" of the Knights Templar organisation, of which he claims to be a member but which the prosecution argued does not exist.

The defendant remained stoney-faced for almost an hour as prosecutors read aloud a long list of names of the dead and injured and recalled chilling details of his massacre.

But he then lost his composure when his self-made movie was screened.

His face red with emotion, Breivik's lips trembled and he wiped away tears as photographs of Islamists set to music were projected on a large screen.

Some of the survivors and families of the victims said they did not interpret the tears as remorse.

"I personally feel that him crying was basically him being moved by what he had accomplished. It was not a sign of regret at all," John Kyrre Lars Hestnes of the July 22 Support Group told AFP.

Survivors and victims' relatives fought back tears throughout the proceedings.

On July 22nd, Breivik killed eight people when he set off a bomb in a van parked at the foot of government buildings in Oslo housing the offices of Labour Prime Minister Jens Stoltenberg, who was not present at the time.

He then travelled to Utoeya island outside Oslo where, dressed as a police officer, he spent more than an hour methodically shooting at hundreds of people attending a ruling Labour Party youth summer camp.

The shooting spree claimed the lives of 69 people, trapped on the small heart-shaped island surrounded by icy waters. It was the deadliest massacre ever committed by a sole gunman.

Prosecutor Svein Holden played a haunting recording of an emergency call to police placed by a young woman on the island, Renate Taarnes, as bullets whizzed around her.

"Come quickly! … There's shooting all the time," she whispered desperately.

She breathed heavily and several times spoke in an almost inaudible whisper, saying at one point that the shooter was on his way towards her.

Numerous shots could be heard getting closer in the background.

Survivors and relatives of the dead also gasped as previously unreleased surveillance footage was shown of people walking towards Breivik's parked van as it exploded outside the government block.

Four court-appointed psychiatrists sitting in the courtroom — who have drawn two contradictory conclusions about whether he is sane — observed Breivik to monitor his reactions.

At one point he smiled broadly as prosecutors recalled elements of his past.

The court also heard Breivik's own calls to police asking to give himself up.

"I have completed my operation and I want to surrender," Breivik said in a calm, polite voice after a first call was cut off.

Before police could arrest him, he went on to kill five more people.

"The accused has committed very serious crimes of a degree we have not seen in our country in modern times," one of the two prosecutors, Inga Bejer Engh, told the court.

He "created fear in the Norwegian population."

In the Utøya massacre, she said "there was panic and fear of death among children and adults."

"He shot at people who were fleeing or hiding, or who he lured out by saying he was a policeman," Engh said, noting that most of the 69 dead were killed by bullets to the head.

Fifty-six of the shooting victims were under the age of 20, and the youngest victim had just celebrated his 14th birthday, she said.

Several relatives of victims cried quietly as they listened to Engh.

The trial was adjourned to Tuesday, when Breivik will start testifying.

It is due to last 10 weeks and focus primarily on whether he is sane and should be sent to prison or a psychiatric ward.

Breivik has previously described his actions as a "cruel but necessary" act of self-defence against those he considered to be "state traitors" for opening Norway up to multiculturalism and allowing the "Muslim invasion" of Europe.

He faces either 21 years in prison — a sentence that could thereafter be extended indefinitely if he is still considered a threat to society — or closed psychiatric care, possibly for life.

Breivik wants to be found sane and accountable for his actions so that his ideology and manifesto will not be considered the ravings of a lunatic.

During the trial, "he will not only defend (his actions) but will also lament, I think, not going further," his lawyer Geir Lippestad said last week.

The five judges will have to decide whether he is sane and accountable when they hand down their verdict sometime in July.