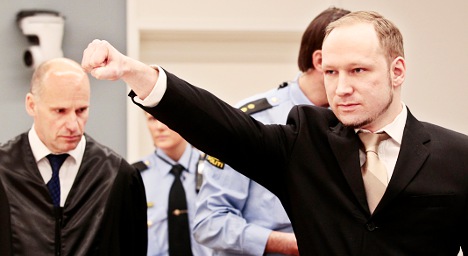 Dressed in a suit and wearing a gold-coloured tie, Breivik made the clenched fist salute after he entered the courtroom and his handcuffs were taken off, touching his chest and extending his right arm in front of him.

In the 1,500-page manifesto Breivik posted online shortly before the July 22 attacks, he described the gesture as "the clenched fist salute" of the Knights Templar organisation.

Lead judge Wenche Elizabeth Arntzen opened the proceedings, which are expected to last 10 weeks and focus primarily on whether or not Breivik is sane and can thus be sent to prison rather than a psychiatric ward.

Shortly thereafter, Breivik, who presented himself to the court as a "writer", told the judges he did not recognize their legitimacy.

"I do not recognize the Norwegian court," he said in a brief statement.

On July 22nd, Breivik, now 33, killed eight people when he set off a bomb in a van parked at the foot of government buildings in Oslo housing the offices of Labour prime minister Jens Stoltenberg, who was not present at the time.

He then travelled to Utøya island outside Oslo where, dressed as a police officer, he spent more than an hour methodically shooting at hundreds of people attending a Labour Party youth summer camp.

The shooting spree left 69 people dead, most of them teenagers trapped on the small heart-shaped island surrounded by icy waters, and is the deadliest massacre ever committed by a sole gunman.

A number of the victims' bodies were found on the "Love Path" that encircles the island, Prosecutor Inga Bejer Engh told the court.

As prosecutors read out the names of those killed and injured, Breivik listened intently with his eyes lowered, appearing to read from a page before him.

Four court-appointed psychiatrists sitting in the courtroom — who have come to two contradictory conclusions about whether he is sane — shot glances at Breivik to observe his reactions.

Engh told the court the attacks "created fear in the Norwegian population".

In the Utøya massacre, she said "there was panic and fear of death among children and adults."

"He shot at people who were fleeing or hiding, or who he lured out by saying he was a policeman," noting that most of the 69 dead were killed by bullets to the head.

Most of the shooting victims were teenagers — 56 of them were under the age of 20 and the youngest victim had just celebrated his 14th birthday, she said.

Several family members of the victims cried quietly as they listened to the proceedings.

The first day of the trial was expected to focus mainly on a run-through of the charges and technicalities of the trial as well as on Breivik's plea.

While he has confessed to the deadliest attacks in post-war Norway, his lawyers have said he will enter a plea of "not guilty".

Breivik has described his actions as "cruel but necessary" and claims he acted alone and in self-defence against those he considered to be "state traitors" for opening Norway up to multiculturalism and allowing the "Muslim invasion" of Europe.

Breivik has been charged with "acts of terror" and faces either 21 years in prison — a sentence that could thereafter be extended indefinitely if he is still considered a threat to society — or closed psychiatric care, possibly for life.

The confessed killer wants to be found sane and accountable for his actions, so that his anti-Islam ideology, as presented in his manifesto, will be taken seriously and not considered the ravings of a lunatic.

He has said that court-ordered psychiatric care would be "worse than death".

During the trial, "he will not only defend (his actions) but will also lament, I think, not going further," Breivik's main defence lawyer Geir Lippestad said last week.

The five judges will have to consider the two contradictory psychiatric evaluations presented to the court, and determine whether he is sane and accountable when they hand down their verdict some time in July.