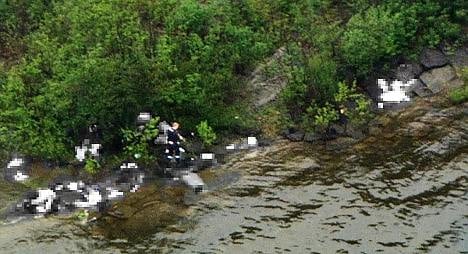 At 3.25 pm, a massive blast shook the capital, jolting the country out of its drowsy, summer stupor.

A small rental truck carrying some 950 kilos of explosives made from fertiliser exploded at the foot of the prime minister's office building in Oslo's government district.

Fortunately, right-wing extremist Anders Behring Breivik had been held up in a traffic jam and was late in setting off the explosion: many employees had already left their offices, eager to get a head-start on their weekend.

But the blast, which was so powerful it blew out windows for several blocks and was heard kilometres/miles away, did kill eight people, mainly on their way in or out of the building, and injured more than 200 people, nine of them seriously.

Government chief Jens Stoltenberg was working out of his official residence at the time and escaped from the attack unharmed.

As Breivik sped off in the escape car he had parked further away, he learned from a radio report that he had failed to bring down the government tower as he had hoped.

His aim, he later told police, was to carry out such a spectacular attack that it would draw widespread attention to his "manifesto", a 1,500-page document detailing his anti-Muslim ideology, which he posted online shortly before setting off the bomb.

With the government building still standing, the right-wing extremist, now 33, decided to set the second phase of his plan into action.

At around 5:45 pm, Breivik, disguised as a police officer and travelling on board the MS Thorbjørn ferry, arrived at Utøya island, some 40 kilometres northwest of Oslo, where the ruling Labour Party's youth wing was hosting its annual summer camp.

Breivik's first victims were Monica Bøsei, 45, who had helped run the camp for two decades and was known as "Mother Utoøa", and 51-year-old off-duty police officer Trond Berntsen.

Bøsei had taken the ferry across the lake with the fake police officer and had become suspicious at his evasive answers to her questions about the Oslo bombing.

Upon arrival at the island, she alerted Berntsen, the stepbrother of Norway's Crown Princess Mette-Marit who was handling security for the camp, but when the pair confronted Breivik he shot and killed them.

Armed with a Ruger rifle and a Glock pistol, both semi-automatic, he strode around the island looking for young campers frightened by news of the Oslo attack, trying to gain their confidence by claiming to be an intelligence officer there to inform them about the bombing.

At the top of a steep hill, he entered the cafeteria, spraying it with bullets and leaving 13 bodies in his wake.

As he slowly followed the "love trail" that circles the island, he killed 10 more people, and mowed down 14 others near the island water pump.

The massacre lasted more than an hour: 186 shell casings were later found.

Trapped on an 0.12 square-kilometre island, many of the mainly teenaged campers threw themselves into the icy lake, desperately trying to swim to safety.

Alerted by the sound of the shots, people at a nearby campsite tried to come to the rescue by boat, only to find themselves ducking bullets as well.

"You will all die, Marxists!" yelled the killer, who was high on illegal drugs, and who appeared to be listening to music throughout the killing spree.

Twice, he called police, introducing himself as "Breivik. Commander. Involved in the anti-communist resistance against Islamisation", and announcing: "Mission accomplished and I will surrender".

But the calls were quickly cut off, and as in the computer games he was so fond of, he continued to methodically shoot at anyone he could spot, not hesitating to finish off the wounded.

Fifty-six of those killed were shot in the head, and many were shot numerous times, with as many as eight bullets pulled out of the body of an 18-year-old boy.

A special police unit that had made its way through congested Oslo traffic and then across the lake on a small, undersized motor boat, which experienced engine failure, finally arrived at the island, and at 6.35 pm, Breivik was arrested.

Out of the 564 people on Utøya that day, 67 were shot to death and two died from falls and drowning while trying to escape from the killer. Thirty-three others were injured, many of them seriously.

Most of the victims were teenagers — 56 of them were under the age of 20 and the youngest had just celebrated his 14th birthday five days earlier.

Breivik has confessed carrying out the attacks but insists he is not guilty of any crime, stressing his actions were "cruel but necessary" parts of his "crusade" against multiculturalism and a "Muslim invasion" of Europe.