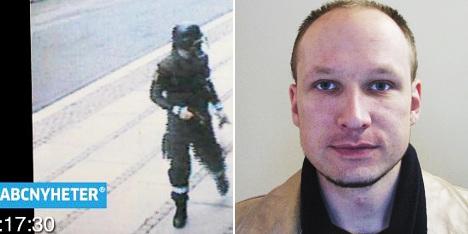 The report, which was released only six days before Breivik is due to go on trial, will reopen the debate on whether the self-confessed killer can be sent to prison or instead be held in a secure psychiatric unit.

"The experts' main conclusion is that the accused, Anders Behring Breivik, is not considered to have been psychotic at the time of the actions on July 22nd, 2011," the Oslo district court said in a statement.

"That means that he is considered criminally responsible at the time of the crime."

The new evaluation counters the findings of an initial probe that found the 33-year-old right-wing extremist was suffering from "paranoid schizophrenia," which meant he would most likely be sentenced to psychiatric care instead of prison.

He then travelled to the small island of Utøya north-west of the capital where, dressed as a police officer, he then spent more than an hour methodically shooting and killing another 69 people.

Most of the victims on Utøya were teenagers attending a summer camp hosted by the ruling Labour Party's youth organisation.

"There is a high risk of repeated violent actions," experts Agnar Aspaas and Terje Tørrissen said in the court statement.

Tørrissen told reporters gathered at the Oslo court that the pair had had "as much, if not more material" as their colleagues who had reached the opposite conclusion about Breivik's mental state.

"We are as sure (of our conclusion) as it is possible to be," he added.

Their lengthy report is based on 11 interviews with the accused, three weeks of permanent observation and the police interrogation transcripts.

The conclusions of the second psychiatric evaluation, which was ordered by an Oslo court amid an outcry over the initial exam findings, were published less than a week before the April 16th start date of Breivik's trial.

In the end however, it will be up to the Oslo court judges to determine his mental state when they publish their verdict around mid-July, thus deciding whether he will be locked up in a closed psychiatric ward, possibly for life, or sent to prison.

Norway has a maximum limit of 21 years behind bars, but Breivik could still face life in prison due to a special provision that allows for extensions of his term for as long as he is considered a danger to society.

Ironically, the new expert conclusion should be welcomed by his defence, which upon his request aims to prove he is sane and criminally responsible.

Breivik, who has said being sent to a psychiatric ward would be "worse than death", wants to be declared sane, according to his lawyers, so as not to damage the political message presented in his 1,500-page manifesto published online shortly before the attacks.

Breivik, who has claimed to be on a crusade against the "Muslim invasion" of Europe and the multi-culturalism embraced by Norway's centre-left government and especially Prime Minister Jens Stoltenberg's Labour Party, has described his actions as "cruel but necessary".