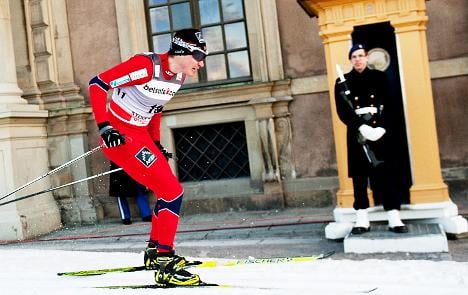 "The marketing campaign aims to mislead tourists and consumers to Stockholm by giving the picture that Stockholm is the capital city for the whole of Scandinavia (Denmark, Norway and Sweden)," the man wrote in his report, according to Aftonbladet newspaper.

The Norwegian has claimed to have been in contact with the city of Stockholm, whereupon he was informed that the title was justified as the Stockholm region lays claim to five international airports, has 3.5 million residents, and attracts over 40 percent of Scandinavia's visitors.

The city also claimed it had the right to call itself the Capital of Scandinavia because the Nobel prizes and the Polar Music Prize are awarded there.

However, the man took issue with these claims, arguing in his complaint that Stockholm not only lacks Scandinavia's biggest airport, but it doesn't even have the region's largest population.

In addition, Stockholm is far from being centrally located within the Nordic region, the man explained, and doesn't even give out the main Nobel prize, the Nobel Peace Prize, which is awarded in the Norwegian capital of Oslo.

"Stockholm is, overall, not any better than the other capital cities in Scandinavia," he wrote.

Tor Sannerud, Oslo's chief of tourism, has let the world know that he is unimpressed as well.

He lashed out at the slogan in Norwegian papers recently, labelling the choice of words as arrogant and "directly misleading".

The offending slogan, which has been in use since 2005, has been making headlines recently after its use ruffled feathers at a French convention earlier this month.

Swedish representatives at the investment fair placed banners and advertising with the slogan on signs and ticket stubs, outraging Norwegians and Danes, some of whom tore the papers to pieces.

The ombudsman is yet to take a position on the case.

PARTNER CONTENT
Mayor of Stockholm: ‘We want to be the impact capital of the world’
Url copied to clipboard!