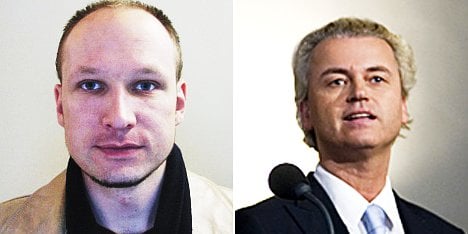 "How far are you willing to go?" Breivik asks Wilders, who in the play is returning home after a screening at the British House of Lords of his real-life anti-Islam film "Fitna" ("Discord" in Arabic).

Released in 2008, "Fitna" showed shocking images of 9/11 and other terror attacks on Western targets interspersed with verses from the Koran.

The movie caused widespread outrage in Muslim countries, as well as opposition from the Dutch government, which feared it might spark a militant response like that which followed the publication in Denmark of cartoons of the Prophet Muhammad.

"I admire you… I support your struggle," Breivik tells Wilders in the piece that was shown in preview to journalists on Thursday afternoon, ahead of an evening performance and another one on Sunday at the De Balie cultural centre.

"Several issues are being touched upon like the value of democracy, multi-culturalism, the Middle East and the situation in Europe," De Balie said in a press release.

On July 22nd last year, Behring Breivik, who has claimed to be on a crusade against multiculturalism and the "Muslim invasion" of Europe, set off a car bomb outside government buildings in Oslo, killing eight people.

He then went to Utøya island, some 40 kilometres north-west of Oslo, and, dressed as a police officer, spent more than an hour methodically shooting and killing another 69 people, mainly teens attending a summer camp hosted by the ruling Labour Party's youth wing.

Wilders strongly condemned Behring Breivik's attacks and said he was disgusted by the Norwegian's mention of him in his 1,500-page manifesto that he had posted on the internet.

In the play, the actors depicting the two men stand on a bare stage, Wilders dressed in a grey suit and Breivik in a red polo shirt and grey trousers.

When Breivik finally asks Wilders how far he is willing to go, Wilders answers: "I do not understand you, although we have the same ideas… I'm sorry."

The play's director Titus Muizelaar told AFP that "Wilders is clear (in the play). He knows his borders are those of democracy."

Wilders is "ready to go very far, but only within political boundaries," Muizelaar said.

"We are not giving extremism a platform, we are only asking questions about contemporary issues," added Youri Albrecht, De Balie's director, saying "these are two lone wolves who have different opinions and go their separate ways without changing."

The play was written by Theodor Holman, a close friend of Dutch filmmaker Theo van Gogh — an outspoken critic of Islam who was murdered in November 2004 in Amsterdam because of his views.

Asked which of the two characters would he chose, Holman said in a recent blog he opted for the Dutch politician.

"I believe in democracy and ultimately democracy protects us," he said.

Wilders's Party for Freedom (PVV) garnered 24 seats in the Netherlands' 150-seat parliament after the 2010 elections, where it lends its support to the coalition government of Dutch Prime Minister Mark Rutte.