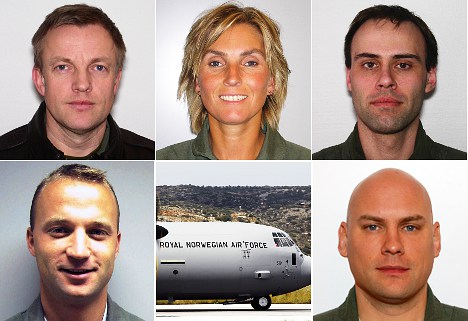 None of the five Norwegian officers on board the plane have yet been found and the Norwegian defence minister Espen Berth Eide was downbeat over the chances of any survivors being located.

"Unfortunately it is a very serious accident. The aircraft has hit the western face of Kebnekaise and pieces of wreckage are lying across an extended area," he said at a press conference on Saturday.

Around 100 people are participating in the search for the missing soldiers at the top of Mount Kebnekaise, some 150 kilometres north of the Arctic Circle, police said.

Wreckage has been found on the east and west sides of the Kebnekaise Massive at an altitude of 1,500 metres and above.

Heavy overnight snowfall was slowing down the search operation due to the heightened avalanche risk, police spokesman Håkan Alselind told a press conference at 9am.

Search teams still face considerable risks in the search for survivors, as four avalanches took place in the area overnight.

The aircraft went missing on Thursday afternoon when it was on its way from Evenes in northern Norway to Kiruna in the far north of Sweden.

"There was a crew of four on board as well as an extra officer. Their mission was to fly from Evenes to Kiruna to pick up materiel and personnel and fly back to Norway," Harald Sunde, head of the Norwegian Armed Forces told Norwegian news agency NTB.

He added that the officers on board the Hercules aircraft were among the "most experienced" in the Norwegian military and that there were no clues regarding what may have happened.

"We have nothing that points us in any particular direction. This is a very robust and new aircraft, one of the best there is. It's been hard to have bad luck with this type of aircraft," said Sunde.

The missing aircraft is a C-130 J "Super" Hercules transport plane manufactured by Lockheed Martin in the United States.