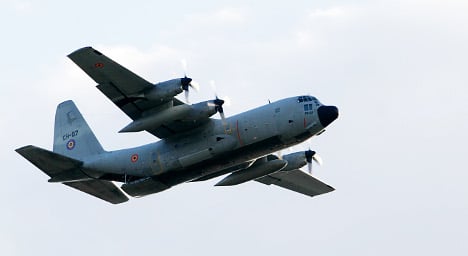 The aircraft was on its way from Evenes in northern Norway to Kiruna in the far north of Sweden when it went missing around 3pm, according to local media reports.

The plane was participating in a Cold Response military training exercise, the armed forces said.

“On Thursday at around 4pm it was reported that a Norwegian military transport aircraft of the type C-130 J with five people on board had been reported missing.

“The flight took off from Evenes airport on Thursday afternoon and was flying to Kirune (Sweden) to pick up personnel there.

Swedish rescue service are leading the search operation. Rescue workers from northern Norway, as well as military units from both countries, are also aiding in the search.

Emergency signals from the plane are said to have been detected coming from the area around Kebnekaise, Sweden's highest peak, Lars Broström of emergency services in Kiruna told the TT news agency.

Track vehicles and other emergency response vehicles have been dispatched from Kiruna and other nearby areas in order to participate in rescue operations if needed, he added.

Two Norwegian rescue helicopters were forced to turn around due to adverse weather conditions, with strong winds in the area where the aircraft is believed to have disappeared.

“Danish and Swedish helicopters are being deployed in the search from the other direction,” rescue chief Björn Wrandel told Norwegian news agency NTB.

"Unfortunately, there is some bad weather near Mount Kebnekaise, so the Norwegian emergency helicopters had to turn back," he said.

Exactly what happened to the plane remains unclear, but several helicopters are now engaged in a search for the missing aircraft.

"We don't know the condition of the aircraft of those who are on board. But we're looking for a crashed airplane," Norwegian military spokesperson John Espen Lien told Norwegian daily Verdens Gang.

The plane was around 80 kilometres west of Kiruna when contact with the aircraft was lost.

"It's a large and sparsely populated area which is now being searched by several helicopters," Fredrik Persson of the Swedish air rescue services told TT.

The missing Hercules was participating in a military training exercise taking place over northern Norway which was scheduled to run from March 12th to March 21st and included 16,000 soldiers from 15 countries.

Cold Response operations are joint exercises between NATO-member Norway and selected members of the Partnership for Peace network.

The Norwegian defence minister, Espen Barth Eide, released a statement shortly after 8pm in which he said all five crew members had died. The statement was retracted ten minutes later when the minister said the aircraft had not yet been found.