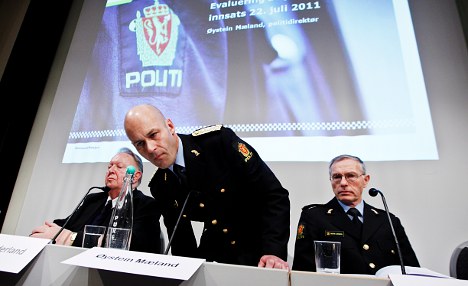 "On behalf of the Norwegian police I want to apologise that we did not arrest Anders Behring Breivik sooner," Norwegian national police commissioner Øystein Mæland said in a statement that presented an evaluation report on the police response to the July 22nd twin attacks.

"It is hard, knowing that so many lives could have been spared if the perpetrator had been arrested sooner," he added at a press conference.

The day of the massacre Behring Breivik, who has claimed to be on a crusade against multi-culturalism and the "Muslim invasion" of Europe, set off a car bomb outside government buildings in Oslo, killing eight people.

He then went to Utøya island north-west of Oslo, and, dressed as a police officer, spent more than an hour methodically shooting and killing another 69 people, mainly teenagers, attending a summer camp hosted by the ruling Labour Party's youth wing.

Police came in for criticism after the attacks, in particular over the relatively distant launch point for an intervention force deployed to the island, as well as the choice of a simple rubber dinghy, which was overloaded and broke down.

According to the police timeline, the massacre lasted for 75 minutes before Behring Breivik was arrested.

"Could we have arrived on Utøya sooner?," Mæland asked.

"The answer is yes. If the police boat had not been overloaded and broken down," he acknowledged.

"We can establish in all certainty that the police did not have the capacity to handle all the aspects of such an event on a regular Friday in July," he said.

Mæland noted also that police had followed existing directives for such a situation.

"It's difficult to single out individual decisions or individual situations that with certainty could have led to the perpetrator being arrested sooner. But we can't exclude that there were alternative action plans that could have saved lives," he said.

Among some 54 areas where the police had problems, the report highlighted poor communications, lack of competence, limited staffing and organisation, as well as poor management of victims, emergency hotlines and planning.

Unni Espeland Marcussen, whose 16-year-old daughter Andrine is believed to have been Behring Breivik's last victim on Utøya, told Aftenposten online she was satisfied with the police apology.

"I think it's good that they're self-critical. We've waited for a long time for an apology," she said.

Now in custody at the high-security Ila prison near Oslo, Behring Breivik, 33, is scheduled to go on trial on April 16th. He has been charged with "acts of terror" and could face life in prison or in a closed psychiatric ward.

A psychiatric evaluation of the confessed killer concluded late last year said that he suffered from "paranoid schizophrenia". A second opinion is currently under way.