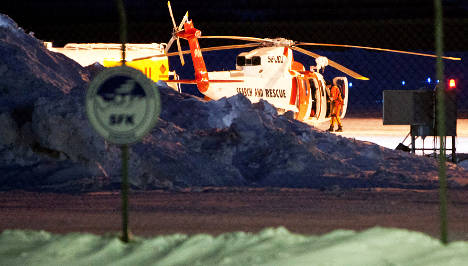 No official announcement has been made that the plane, its wreckage or passengers and crew had been found.

Defence Minister Espen Barth Eide expressed his sympathy for the families and friends of the missing officers.

”This is one of the worst pieces of news a defence minister can receive: that an airplane is missing and later confirmed crashed. My thoughts go to those closest to the people who were on board.”

He underlined that the crew was still considered to be missing, and not presumed dead.

”There’s a major search operation underway in the area where we know the plane went down, but nobody has yet found the craft involved in the accident,” Barth Eide told reporters at a 9pm press conference.

Air rescue official Matthias Hansson earlier told AFP that a "Norwegian Hercules transport plane en route from Evenes in Norway to Kiruna in Sweden
has been reported missing near Kiruna".

The plane last made contact with Kiruna air traffic control around 2.40pm and then disappeared from radar screens, he said.

Bad weather conditions were reported in the area.

Helicopters were sent from Norway, Sweden and Denmark to search for the aircraft.

The Hercules was taking part in a Norwegian-led military exercise dubbed Cold Response 2012, with some 16,000 people joining from 15 countries.